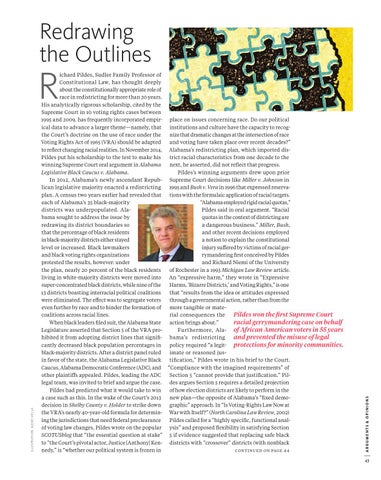 Redrawing the Outlines place on issues concerning race. Do our political institutions and culture have the capacity to recognize that dramatic changes at the intersection of race and voting have taken place over recent decades?” Alabama’s redistricting plan, which imported district racial characteristics from one decade to the next, he asserted, did not reflect that progress. Pildes’s winning arguments drew upon prior Supreme Court decisions like Miller v. Johnson in 1995 and Bush v. Vera in 1996 that expressed reservations with the formulaic application of racial targets. “Alabama employed rigid racial quotas,” Pildes said in oral argument. “Racial quotas in the context of districting are a dangerous business.” Miller, Bush, and other recent decisions employed a notion to explain the constitutional injury suffered by victims of racial gerrymandering first conceived by Pildes and Richard Niemi of the University of Rochester in a 1993 Michigan Law Review article. An “expressive harm,” they wrote in “Expressive Harms, ‘Bizarre Districts,’ and Voting Rights,” is one that “results from the idea or attitudes expressed through a governmental action, rather than from the more tangible or matePildes won the first Supreme Court rial consequences the racial gerrymandering case on behalf action brings about.” Furthermore, Ala- of African American voters in 55 years and prevented the misuse of legal bama’s redistricting policy required “a legit- protections for minority communities. imate or reasoned justification,” Pildes wrote in his brief to the Court. “Compliance with the imagined requirements” of Section 5 “cannot provide that justification.” Pildes argues Section 5 requires a detailed projection of how election districts are likely to perform in the new plan—the opposite of Alabama’s “fixed demographic” approach. In “Is Voting-Rights Law Now at War with Itself?” (North Carolina Law Review, 2002) Pildes called for a “highly specific, functional analysis” and proposed flexibility in satisfying Section 5 if evidence suggested that replacing safe black districts with “crossover” districts (with nonblack continued on page 4 4

ichard Pildes, Sudler Family Professor of Constitutional Law, has thought deeply about the constitutionally appropriate role of race in redistricting for more than 20 years. His analytically rigorous scholarship, cited by the Supreme Court in 10 voting rights cases between 1995 and 2009, has frequently incorporated empirical data to advance a larger theme—namely, that the Court’s doctrine on the use of race under the Voting Rights Act of 1965 (VRA) should be adapted to reflect changing racial realities. In November 2014, Pildes put his scholarship to the test to make his winning Supreme Court oral argument in Alabama Legislative Black Caucus v. Alabama. In 2012, Alabama’s newly ascendant Republican legislative majority enacted a redistricting plan. A census two years earlier had revealed that each of Alabama’s 35 black-majority districts was underpopulated. Alabama sought to address the issue by redrawing its district boundaries so that the percentage of black residents in black-majority districts either stayed level or increased. Black lawmakers and black voting rights organizations protested the results, however: under the plan, nearly 20 percent of the black residents living in white-majority districts were moved into super-concentrated black districts, while nine of the 13 districts boasting interracial political coalitions were eliminated. The effect was to segregate voters even further by race and to hinder the formation of coalitions across racial lines. When black leaders filed suit, the Alabama State Legislature asserted that Section 5 of the VRA prohibited it from adopting district lines that significantly decreased black population percentages in black-majority districts. After a district panel ruled in favor of the state, the Alabama Legislative Black Caucus, Alabama Democratic Conference (ADC), and other plaintiffs appealed. Pildes, leading the ADC legal team, was invited to brief and argue the case. Pildes had predicted what it would take to win a case such as this. In the wake of the Court’s 2013 decision in Shelby County v. Holder to strike down the VRA’s nearly 40-year-old formula for determining the jurisdictions that need federal preclearance of voting law changes, Pildes wrote on the popular SCOTUSblog that “the essential question at stake” to “the Court’s pivotal actor, Justice [Anthony] Kennedy,” is “whether our political system is frozen in