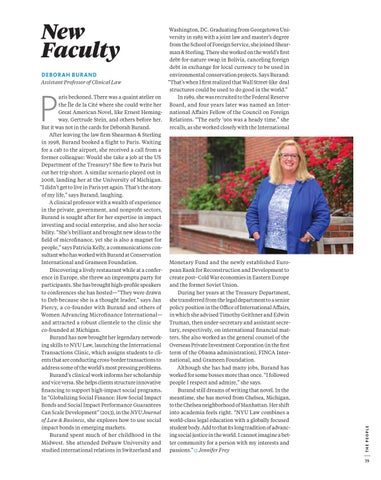 aris beckoned. There was a quaint atelier on the �Ile de la Cité where she could write her Great American Novel, like Ernest Hemingway, Gertrude Stein, and others before her. But it was not in the cards for Deborah Burand. After leaving the law firm Shearman & Sterling in 1998, Burand booked a flight to Paris. Waiting for a cab to the airport, she received a call from a former colleague: Would she take a job at the US Department of the Treasury? She flew to Paris but cut her trip short. A similar scenario played out in 2008, landing her at the University of Michigan. “I didn’t get to live in Paris yet again. That’s the story of my life,” says Burand, laughing. A clinical professor with a wealth of experience in the private, government, and nonprofit sectors, Burand is sought after for her expertise in impact investing and social enterprise, and also her sociability. “She’s brilliant and brought new ideas to the field of microfinance, yet she is also a magnet for people,” says Patricia Kelly, a communications consultant who has worked with Burand at Conservation International and Grameen Foundation. Discovering a lively restaurant while at a conference in Europe, she threw an impromptu party for participants. She has brought high-profile speakers to conferences she has hosted—“They were drawn to Deb because she is a thought leader,” says Jan Piercy, a co-founder with Burand and others of Women Advancing Microfinance International— and attracted a robust clientele to the clinic she co-founded at Michigan. Burand has now brought her legendary networking skills to NYU Law, launching the International Transactions Clinic, which assigns students to clients that are conducting cross-border transactions to address some of the world’s most pressing problems. Burand’s clinical work informs her scholarship and vice versa. She helps clients structure innovative financing to support high-impact social programs. In “Globalizing Social Finance: How Social Impact Bonds and Social Impact Performance Guarantees Can Scale Development” (2013), in the NYU Journal of Law & Business, she explores how to use social impact bonds in emerging markets. Burand spent much of her childhood in the Midwest. She attended DePauw University and studied international relations in Switzerland and

Washington, DC. Graduating from Georgetown University in 1985 with a joint law and master’s degree from the School of Foreign Service, she joined Shearman & Sterling. There she worked on the world’s first debt-for-nature swap in Bolivia, canceling foreign debt in exchange for local currency to be used in environmental conservation projects. Says Burand: “That’s when I first realized that Wall Street-like deal structures could be used to do good in the world.” In 1989, she was recruited to the Federal Reserve Board, and four years later was named an International Affairs Fellow of the Council on Foreign Relations. “The early ’90s was a heady time,” she recalls, as she worked closely with the International

Monetary Fund and the newly established European Bank for Reconstruction and Development to create post–Cold War economies in Eastern Europe and the former Soviet Union. During her years at the Treasury Department, she transferred from the legal department to a senior policy position in the Office of International Affairs, in which she advised Timothy Geithner and Edwin Truman, then under-secretary and assistant secretary, respectively, on international financial matters. She also worked as the general counsel of the Overseas Private Investment Corporation (in the first term of the Obama administration), FINCA International, and Grameen Foundation. Although she has had many jobs, Burand has worked for some bosses more than once. “I followed people I respect and admire,” she says. Burand still dreams of writing that novel. In the meantime, she has moved from Chelsea, Michigan, to the Chelsea neighborhood of Manhattan. Her shift into academia feels right. “NYU Law combines a world-class legal education with a globally focused student body. Add to that its long tradition of advancing social justice in the world. I cannot imagine a better community for a person with my interests and passions.” Jennifer Frey