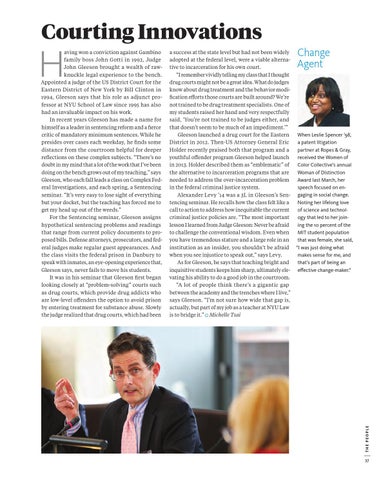 Courting Innovations a success at the state level but had not been widely adopted at the federal level, were a viable alternative to incarceration for his own court. “I remember vividly telling my class that I thought drug courts might not be a great idea. What do judges know about drug treatment and the behavior modification efforts those courts are built around? We’re not trained to be drug treatment specialists. One of my students raised her hand and very respectfully said, ‘You’re not trained to be judges either, and that doesn’t seem to be much of an impediment.’” Gleeson launched a drug court for the Eastern District in 2012. Then-US Attorney General Eric Holder recently praised both that program and a youthful offender program Gleeson helped launch in 2013. Holder described them as “emblematic” of the alternative to incarceration programs that are needed to address the over-incarceration problem in the federal criminal justice system. Alexander Levy ’14 was a 3L in Gleeson’s Sentencing seminar. He recalls how the class felt like a call to action to address how inequitable the current criminal justice policies are. “The most important lesson I learned from Judge Gleeson: Never be afraid to challenge the conventional wisdom. Even when you have tremendous stature and a large role in an institution as an insider, you shouldn’t be afraid when you see injustice to speak out,” says Levy. As for Gleeson, he says that teaching bright and inquisitive students keeps him sharp, ultimately elevating his ability to do a good job in the courtroom. “A lot of people think there’s a gigantic gap between the academy and the trenches where I live,” says Gleeson. “I’m not sure how wide that gap is, actually, but part of my job as a teacher at NYU Law is to bridge it.” Michelle Tsai

When Leslie Spencer ’98, a patent litigation partner at Ropes & Gray, received the Women of Color Collective’s annual Woman of Distinction Award last March, her speech focused on engaging in social change. Noting her lifelong love of science and technology that led to her joining the 10 percent of the MIT student population that was female, she said, “I was just doing what makes sense for me, and that’s part of being an effective change-maker.”

aving won a conviction against Gambino family boss John Gotti in 1992, Judge John Gleeson brought a wealth of rawknuckle legal experience to the bench. Appointed a judge of the US District Court for the Eastern District of New York by Bill Clinton in 1994, Gleeson says that his role as adjunct professor at NYU School of Law since 1995 has also had an invaluable impact on his work. In recent years Gleeson has made a name for himself as a leader in sentencing reform and a fierce critic of mandatory minimum sentences. While he presides over cases each weekday, he finds some distance from the courtroom helpful for deeper reflections on these complex subjects. “There’s no doubt in my mind that a lot of the work that I’ve been doing on the bench grows out of my teaching,” says Gleeson, who each fall leads a class on Complex Federal Investigations, and each spring, a Sentencing seminar. “It’s very easy to lose sight of everything but your docket, but the teaching has forced me to get my head up out of the weeds.” For the Sentencing seminar, Gleeson assigns hypothetical sentencing problems and readings that range from current policy documents to proposed bills. Defense attorneys, prosecutors, and federal judges make regular guest appearances. And the class visits the federal prison in Danbury to speak with inmates, an eye-opening experience that, Gleeson says, never fails to move his students. It was in his seminar that Gleeson first began looking closely at “problem-solving” courts such as drug courts, which provide drug addicts who are low-level offenders the option to avoid prison by entering treatment for substance abuse. Slowly the judge realized that drug courts, which had been