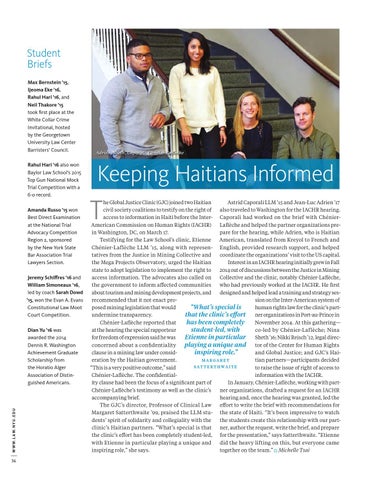 he Global Justice Clinic (GJC) joined two Haitian Astrid Caporali LLM ’15 and Jean-Luc Adrien ’17 civil society coalitions to testify on the right of also traveled to Washington for the IACHR hearing. access to information in Haiti before the Inter- Caporali had worked on the brief with ChénierLaflèche and helped the partner organizations preAmerican Commission on Human Rights (IACHR) pare for the hearing, while Adrien, who is Haitian in Washington, DC, on March 17. Testifying for the Law School’s clinic, Etienne American, translated from Kreyol to French and Chénier-Laflèche LLM ’15, along with represen- English, provided research support, and helped tatives from the Justice in Mining Collective and coordinate the organizations’ visit to the US capital. the Mega Projects Observatory, urged the Haitian Interest in an IACHR hearing initially grew in Fall state to adopt legislation to implement the right to 2014 out of discussions between the Justice in Mining access information. The advocates also called on Collective and the clinic, notably Chénier-Laflèche, the government to inform affected communities who had previously worked at the IACHR. He first about tourism and mining development projects, and designed and helped lead a training and strategy sesrecommended that it not enact prosion on the Inter-American system of posed mining legislation that would “What’s special is human rights law for the clinic’s partthat the clinic’s effort ner organizations in Port-au-Prince in undermine transparency. has been completely Chénier-Laflèche reported that November 2014. At this gathering— student-led, with at the hearing the special rapporteur co-led by Chénier-Laflèche; Nina Etienne in particular Sheth ’16; Nikki Reisch ’12, legal direcfor freedom of expression said he was playing a unique and tor of the Center for Human Rights concerned about a confidentiality inspiring role.” clause in a mining law under considand Global Justice; and GJC’s Haieration by the Haitian government. margaret tian partners—participants decided satterthwaite “This is a very positive outcome,” said to raise the issue of right of access to Chénier-Laflèche. The confidentialinformation with the IACHR. ity clause had been the focus of a significant part of In January, Chénier-Laflèche, working with partChénier-Laflèche’s testimony as well as the clinic’s ner organizations, drafted a request for an IACHR accompanying brief. hearing and, once the hearing was granted, led the The GJC’s director, Professor of Clinical Law effort to write the brief with recommendations for Margaret Satterthwaite ’99, praised the LLM stu- the state of Haiti. “It’s been impressive to watch dents’ spirit of solidarity and collegiality with the the students create this relationship with our partclinic’s Haitian partners. “What’s special is that ner, author the request, write the brief, and prepare the clinic’s effort has been completely student-led, for the presentation,” says Satterthwaite. “Etienne with Etienne in particular playing a unique and did the heavy lifting on this, but everyone came inspiring role,” she says. together on the team.” Michelle Tsai