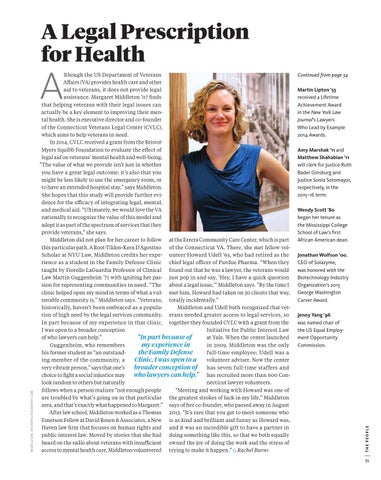 lthough the US Department of Veterans Affairs (VA) provides health care and other aid to veterans, it does not provide legal assistance. Margaret Middleton ’07 finds that helping veterans with their legal issues can actually be a key element to improving their mental health. She is executive director and co-founder of the Connecticut Veterans Legal Center (CVLC), which aims to help veterans in need.  In 2014, CVLC received a grant from the BristolMyers Squibb Foundation to evaluate the effect of legal aid on veterans’ mental health and well-being. “The value of what we provide isn’t just in whether you have a great legal outcome; it’s also that you might be less likely to use the emergency room, or to have an extended hospital stay,” says Middleton. She hopes that this study will provide further evidence for the efficacy of integrating legal, mental, and medical aid. “Ultimately, we would love the VA nationally to recognize the value of this model and adopt it as part of the spectrum of services that they provide veterans,” she says.  Middleton did not plan for her career to follow at the Errera Community Care Center, which is part this particular path. A Root-Tilden-Kern D’Agostino of the Connecticut VA. There, she met fellow volScholar at NYU Law, Middleton credits her expe- unteer Howard Udell ’65, who had retired as the rience as a student in the Family Defense Clinic chief legal officer of Purdue Pharma. “When they taught by Fiorello LaGuardia Professor of Clinical found out that he was a lawyer, the veterans would Law Martin Guggenheim ’71 with igniting her pas- just pop in and say, ‘Hey, I have a quick question sion for representing communities in need. “The about a legal issue,’” Middleton says. “By the time I clinic helped open my mind in terms of what a vul- met him, Howard had taken on 30 clients that way, nerable community is,” Middleton says. “Veterans, totally incidentally.” historically, haven’t been embraced as a populaMiddleton and Udell both recognized that vettion of high need by the legal services community. erans needed greater access to legal services, so In part because of my experience in that clinic, together they founded CVLC with a grant from the I was open to a broader conception Initiative for Public Interest Law “In part because of at Yale. When the center launched of who lawyers can help.” my experience in Guggenheim, who remembers in 2009, Middleton was the only the Family Defense his former student as “an outstandfull-time employee; Udell was a Clinic, I was open to a ing member of the community, a volunteer adviser. Now the center broader conception of has seven full-time staffers and very vibrant person,” says that one’s who lawyers can help.” has recruited more than 600 Conchoice to fight a social injustice may look random to others but naturally necticut lawyer volunteers. follows when a person realizes “not enough people “Meeting and working with Howard was one of are troubled by what’s going on in that particular the greatest strokes of luck in my life,” Middleton area, and that’s exactly what happened to Margaret.” says of her co-founder, who passed away in August After law school, Middleton worked as a Thomas 2013. “It’s rare that you get to meet someone who Emerson Fellow at David Rosen & Associates, a New is as kind and brilliant and funny as Howard was, Haven law firm that focuses on human rights and and it was an incredible gift to have a partner in public interest law. Moved by stories that she had doing something like this, so that we both equally heard on the radio about veterans with insufficient owned the joy of doing the work and the stress of access to mental health care, Middleton volunteered trying to make it happen.” Rachel Burns