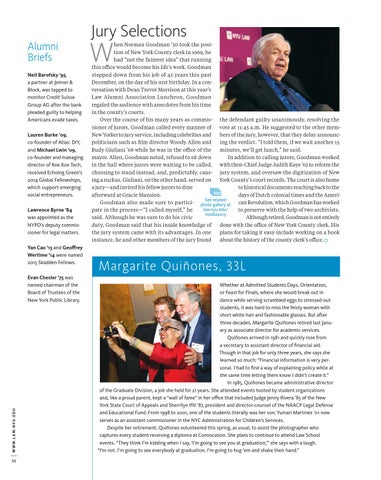 Evan Chesler ’75 was named chairman of the Board of Trustees of the New York Public Library.

hen Norman Goodman ’50 took the position of New York County clerk in 1969, he had “not the faintest idea” that running this office would become his life’s work. Goodman stepped down from his job of 45 years this past December, on the day of his 91st birthday. In a conversation with Dean Trevor Morrison at this year’s Law Alumni Association Luncheon, Goodman regaled the audience with anecdotes from his time in the county’s courts. Over the course of his many years as commis- the defendant guilty unanimously, resolving the sioner of jurors, Goodman called every manner of vote at 11:45 a.m. He suggested to the other memNew Yorker to jury service, including celebrities and bers of the jury, however, that they delay announcpoliticians such as film director Woody Allen and ing the verdict. “I told them, if we wait another 15 Rudy Giuliani ’68 while he was in the office of the minutes, we’ll get lunch,” he said. mayor. Allen, Goodman noted, refused to sit down In addition to calling jurors, Goodman worked in the hall where jurors were waiting to be called, with then-Chief Judge Judith Kaye ’62 to reform the choosing to stand instead, and, predictably, caus- jury system, and oversaw the digitization of New ing a ruckus. Giuliani, on the other hand, served on York County’s court records. The court is also home a jury—and invited his fellow jurors to dine to historical documents reaching back to the afterward at Gracie Mansion. days of Dutch colonial times and the AmeriSee related Goodman also made sure to partici- photo gallery at can Revolution, which Goodman has worked law.nyu.edu/ pate in the process—“I called myself,” he to preserve with the help of two archivists. media2015 said. Although he was sure to do his civic Although retired, Goodman is not entirely done with the office of New York County clerk. His duty, Goodman said that his inside knowledge of plans for taking it easy include working on a book the jury system came with its advantages. In one about the history of the county clerk’s office. instance, he and other members of the jury found

Margarite Quiñones, 33L Whether at Admitted Students Days, Orientation, or Feast for Finals, where she would break out in dance while serving scrambled eggs to stressed-out students, it was hard to miss the feisty woman with short white hair and fashionable glasses. But after three decades, Margarite Quiñones retired last January as associate director for academic services. Quiñones arrived in 1981 and quickly rose from a secretary to assistant director of financial aid. Though in that job for only three years, she says she learned so much: “Financial information is very personal. I had to find a way of explaining policy while at the same time letting them know I didn’t create it.” In 1985, Quiñones became administrative director of the Graduate Division, a job she held for 21 years. She attended events hosted by student organizations and, like a proud parent, kept a “wall of fame” in her office that included Judge Jenny Rivera ’85 of the New York State Court of Appeals and Sherrilyn Ifill ’87, president and director-counsel of the NAACP Legal Defense and Educational Fund. From 1998 to 2001, one of the students literally was her son; Yumari Martinez ’01 now serves as an assistant commissioner in the NYC Administration for Children’s Services. Despite her retirement, Quiñones volunteered this spring, as usual, to assist the photographer who captures every student receiving a diploma at Convocation. She plans to continue to attend Law School events. “They think I’m kidding when I say, ‘I’m going to see you at graduation,’” she says with a laugh. “I’m not. I’m going to see everybody at graduation. I’m going to hug ’em and shake their hand.”