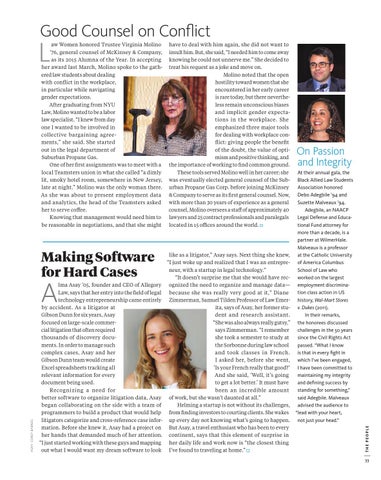 aw Women honored Trustee Virginia Molino ’76, general counsel of McKinsey & Company, as its 2015 Alumna of the Year. In accepting her award last March, Molino spoke to the gathered law students about dealing with conflict in the workplace, in particular while navigating gender expectations. After graduating from NYU Law, Molino wanted to be a labor law specialist. “I knew from day one I wanted to be involved in collective bargaining agreements,” she said. She started out in the legal department of Suburban Propane Gas. One of her first assignments was to meet with a local Teamsters union in what she called “a dimly lit, smoky hotel room, somewhere in New Jersey, late at night.” Molino was the only woman there. As she was about to present employment data and analytics, the head of the Teamsters asked her to serve coffee. Knowing that management would need him to be reasonable in negotiations, and that she might

have to deal with him again, she did not want to insult him. But, she said, “I needed him to come away knowing he could not unnerve me.” She decided to treat his request as a joke and move on. Molino noted that the open hostility toward women that she encountered in her early career is rare today, but there nevertheless remain unconscious biases and implicit gender expectations in the workplace. She emphasized three major tools for dealing with workplace conflict: giving people the benefit of the doubt, the value of optimism and positive thinking, and the importance of working to find common ground. These tools served Molino well in her career; she was eventually elected general counsel of the Suburban Propane Gas Corp. before joining McKinsey & Company to serve as its first general counsel. Now, with more than 30 years of experience as a general counsel, Molino oversees a staff of approximately 40 lawyers and 25 contract professionals and paralegals located in 15 offices around the world.

On Passion and Integrity

At their annual gala, the Black Allied Law Students Association honored Debo Adegbile ’94 and Suzette Malveaux ’94. Adegbile, an NAACP Legal Defense and Educational Fund attorney for more than a decade, is a partner at WilmerHale. Malveaux is a professor like as a litigator,” Asay says. Next thing she knew, at the Catholic University “I just woke up and realized that I was an entrepre- of America Columbus School of Law who neur, with a startup in legal technology.” “It doesn’t surprise me that she would have rec- worked on the largest lma Asay ’05, founder and CEO of Allegory ognized the need to organize and manage data— employment discrimination class action in US Law, says that her entry into the field of legal because she was really very good at it,” Diane technology entrepreneurship came entirely Zimmerman, Samuel Tilden Professor of Law Emer- history, Wal-Mart Stores by accident. As a litigator at ita, says of Asay, her former stu- v. Dukes (2011). In their remarks, Gibson Dunn for six years, Asay dent and research assistant. focused on large-scale commer“She was also always really gutsy,” the honorees discussed challenges in the 50 years cial litigation that often required says Zimmerman. “I remember since the Civil Rights Act thousands of discovery docushe took a semester to study at passed. “What I know ments. In order to manage such the Sorbonne during law school is that in every fight in complex cases, Asay and her and took classes in French. Gibson Dunn team would create I asked her, before she went, which I’ve been engaged, I have been committed to Excel spreadsheets tracking all ’Is your French really that good?’ maintaining my integrity relevant information for every And she said, ’Well, it’s going and defining success by document being used. to get a lot better.’ It must have standing for something,” Recognizing a need for been an incredible amount said Adegbile. Malveaux better software to organize litigation data, Asay of work, but she wasn’t daunted at all.” began collaborating on the side with a team of Helming a startup is not without its challenges, advised the audience to programmers to build a product that would help from finding investors to courting clients. She wakes “lead with your heart, not just your head.” litigators categorize and cross-reference case infor- up every day not knowing what’s going to happen.

mation. Before she knew it, Asay had a project on her hands that demanded much of her attention. “I just started working with these guys and mapping out what I would want my dream software to look

But Asay, a travel enthusiast who has been to every continent, says that this element of surprise in her daily life and work now is “the closest thing I’ve found to traveling at home.”