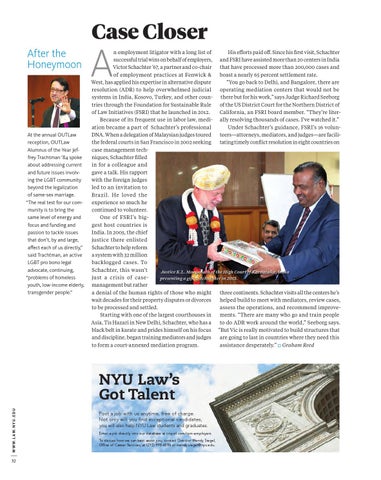 At the annual OUTLaw reception, OUTLaw Alumnus of the Year Jeffrey Trachtman ’84 spoke about addressing current and future issues involving the LGBT community beyond the legalization of same-sex marriage. “The real test for our community is to bring the same level of energy and focus and funding and passion to tackle issues that don’t, by and large, affect each of us directly,” said Trachtman, an active LGBT pro bono legal advocate, continuing, “problems of homeless youth, low-income elderly, transgender people.”

n employment litigator with a long list of His efforts paid off. Since his first visit, Schachter successful trial wins on behalf of employers, and FSRI have assisted more than 20 centers in India Victor Schachter ’67, a partner and co-chair that have processed more than 200,000 cases and of employment practices at Fenwick & boast a nearly 65 percent settlement rate. West, has applied his expertise in alternative dispute “You go back to Delhi, and Bangalore, there are resolution (ADR) to help overwhelmed judicial operating mediation centers that would not be systems in India, Kosovo, Turkey, and other counthere but for his work,” says Judge Richard Seeborg of the US District Court for the Northern District of tries through the Foundation for Sustainable Rule California, an FSRI board member. “They’re literof Law Initiatives (FSRI) that he launched in 2012. Because of its frequent use in labor law, medi- ally resolving thousands of cases. I’ve watched it.” ation became a part of Schachter’s professional Under Schachter’s guidance, FSRI’s 16 volunDNA. When a delegation of Malaysian judges toured teers—attorneys, mediators, and judges—are facilithe federal courts in San Francisco in 2002 seeking tating timely conflict resolution in eight countries on case management techniques, Schachter filled in for a colleague and gave a talk. His rapport with the foreign judges led to an invitation to Brazil. He loved the experience so much he continued to volunteer. One of FSRI’s biggest host countries is India. In 2005, the chief justice there enlisted Schachter to help reform a system with 32 million backlogged cases. To Schachter, this wasn’t Justice K.L. Manjunath of the High Court of Karnataka, India just a crisis of casepresenting a gift to Schachter in 2013. management but rather a denial of the human rights of those who might three continents. Schachter visits all the centers he’s wait decades for their property disputes or divorces helped build to meet with mediators, review cases, to be processed and settled. assess the operations, and recommend improvements. “There are many who go and train people Starting with one of the largest courthouses in Asia, Tis Hazari in New Delhi, Schachter, who has a to do ADR work around the world,” Seeborg says. black belt in karate and prides himself on his focus “But Vic is really motivated to build structures that and discipline, began training mediators and judges are going to last in countries where they need this to form a court-annexed mediation program. assistance desperately.” Graham Reed

Post a job with us anytime, free of charge. Not only will you find exceptional candidates, you will also help NYU Law students and graduates. Enter a job directly into our database at tinyurl.com/csm-employers To discuss how we can best assist you, contact Director Wendy Siegel, Office of Career Services, at (212) 998-6096 or wendy.siegel@nyu.edu.