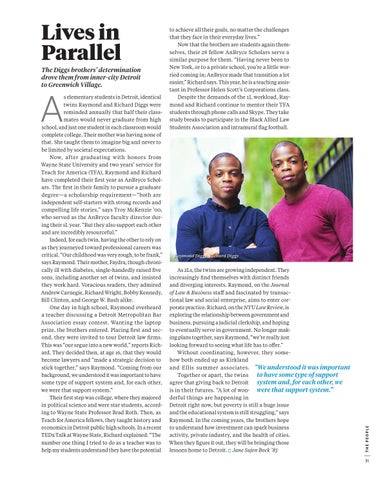 The Diggs brothers’ determination drove them from inner-city Detroit to Greenwich Village.

s elementary students in Detroit, identical twins Raymond and Richard Diggs were reminded annually that half their classmates would never graduate from high school, and just one student in each classroom would complete college. Their mother was having none of that. She taught them to imagine big and never to be limited by societal expectations. Now, after graduating with honors from Wayne State University and two years’ service for Teach for America (TFA), Raymond and Richard have completed their first year as AnBryce Scholars. The first in their family to pursue a graduate degree—a scholarship requirement—“both are independent self-starters with strong records and compelling life stories,” says Troy McKenzie ’00, who served as the AnBryce faculty director during their 1L year. “But they also support each other and are incredibly resourceful.” Indeed, for each twin, having the other to rely on as they journeyed toward professional careers was critical. “Our childhood was very rough, to be frank,” says Raymond. Their mother, Faydra, though chronically ill with diabetes, single-handedly raised five sons, including another set of twins, and insisted they work hard. Voracious readers, they admired Andrew Carnegie, Richard Wright, Bobby Kennedy, Bill Clinton, and George W. Bush alike. One day in high school, Raymond overheard a teacher discussing a Detroit Metropolitan Bar Association essay contest. Wanting the laptop prize, the brothers entered. Placing first and second, they were invited to tour Detroit law firms. This was “our segue into a new world,” reports Richard. They decided then, at age 16, that they would become lawyers and “made a strategic decision to stick together,” says Raymond. “Coming from our background, we understood it was important to have some type of support system and, for each other, we were that support system.” Their first step was college, where they majored in political science and were star students, according to Wayne State Professor Brad Roth. Then, as Teach for America fellows, they taught history and economics in Detroit public high schools. In a recent TEDx Talk at Wayne State, Richard explained: “The number one thing I tried to do as a teacher was to help my students understand they have the potential

As 2Ls, the twins are growing independent. They increasingly find themselves with distinct friends and diverging interests. Raymond, on the Journal of Law & Business staff and fascinated by transactional law and social enterprise, aims to enter corporate practice. Richard, on the NYU Law Review, is exploring the relationship between government and business, pursuing a judicial clerkship, and hoping to eventually serve in government. No longer making plans together, says Raymond, “we’re really just looking forward to seeing what life has to offer.” Without coordinating, however, they somehow both ended up as Kirkland and Ellis summer associates. “We understood it was important to have some type of support Together or apart, the twins system and, for each other, we agree that giving back to Detroit is in their futures. “A lot of won- were that support system.” derful things are happening in Detroit right now, but poverty is still a huge issue and the educational system is still struggling,” says Raymond. In the coming years, the brothers hope to understand how investment can spark business activity, private industry, and the health of cities. When they figure it out, they will be bringing those lessons home to Detroit. Jane Sujen Bock ’85

to achieve all their goals, no matter the challenges that they face in their everyday lives.” Now that the brothers are students again themselves, their 28 fellow AnBryce Scholars serve a similar purpose for them. “Having never been to New York, or to a private school, you’re a little worried coming in; AnBryce made that transition a lot easier,” Richard says. This year, he is a teaching assistant in Professor Helen Scott’s Corporations class. Despite the demands of the 1L workload, Raymond and Richard continue to mentor their TFA students through phone calls and Skype. They take study breaks to participate in the Black Allied Law Students Association and intramural flag football.