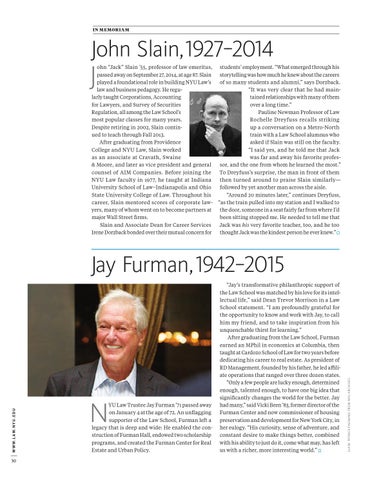 ohn “Jack” Slain ’55, professor of law emeritus, passed away on September 27, 2014, at age 87. Slain played a foundational role in building NYU Law’s law and business pedagogy. He regularly taught Corporations, Accounting for Lawyers, and Survey of Securities Regulation, all among the Law School’s most popular classes for many years. Despite retiring in 2002, Slain continued to teach through Fall 2013. After graduating from Providence College and NYU Law, Slain worked as an associate at Cravath, Swaine & Moore, and later as vice president and general counsel of AIM Companies. Before joining the NYU Law faculty in 1977, he taught at Indiana University School of Law–Indianapolis and Ohio State University College of Law. Throughout his career, Slain mentored scores of corporate lawyers, many of whom went on to become partners at major Wall Street firms. Slain and Associate Dean for Career Services Irene Dorzback bonded over their mutual concern for

students’ employment. “What emerged through his storytelling was how much he knew about the careers of so many students and alumni,” says Dorzback. “It was very clear that he had maintained relationships with many of them over a long time.” Pauline Newman Professor of Law Rochelle Dreyfuss recalls striking up a conversation on a Metro-North train with a Law School alumnus who asked if Slain was still on the faculty. “I said yes, and he told me that Jack was far and away his favorite professor, and the one from whom he learned the most.” To Dreyfuss’s surprise, the man in front of them then turned around to praise Slain similarly— followed by yet another man across the aisle. “Around 20 minutes later,” continues Dreyfuss, “as the train pulled into my station and I walked to the door, someone in a seat fairly far from where I’d been sitting stopped me. He needed to tell me that Jack was his very favorite teacher, too, and he too thought Jack was the kindest person he ever knew.”

YU Law Trustee Jay Furman ’71 passed away on January 4 at the age of 72. An unflagging supporter of the Law School, Furman left a legacy that is deep and wide: He enabled the construction of Furman Hall, endowed two scholarship programs, and created the Furman Center for Real Estate and Urban Policy.

“Jay’s transformative philanthropic support of the Law School was matched by his love for its intellectual life,” said Dean Trevor Morrison in a Law School statement. “I am profoundly grateful for the opportunity to know and work with Jay, to call him my friend, and to take inspiration from his unquenchable thirst for learning.” After graduating from the Law School, Furman earned an MPhil in economics at Columbia, then taught at Cardozo School of Law for two years before dedicating his career to real estate. As president of RD Management, founded by his father, he led affiliate operations that ranged over three dozen states. “Only a few people are lucky enough, determined enough, talented enough, to have one big idea that significantly changes the world for the better. Jay had many,” said Vicki Been ’83, former director of the Furman Center and now commissioner of housing preservation and development for New York City, in her eulogy. “His curiosity, sense of adventure, and constant desire to make things better, combined with his ability to just do it, come what may, has left us with a richer, more interesting world.”