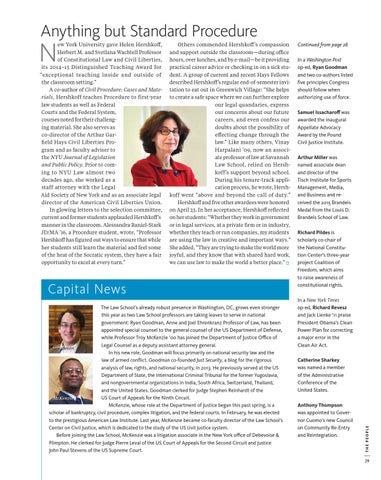 Anything but Standard Procedure Others commended Hershkoff’s compassion and support outside the classroom—during office hours, over lunches, and by e-mail—be it providing practical career advice or checking in on a sick student. A group of current and recent Hays Fellows described Hershkoff’s regular end-of-semester invitation to eat out in Greenwich Village: “She helps to create a safe space where we can further explore our legal quandaries, express our concerns about our future careers, and even confess our doubts about the possibility of effecting change through the law.” Like many others, Vinay Harpalani ’09, now an associate professor of law at Savannah Law School, relied on Hershkoff’s support beyond school. During his tenure-track application process, he wrote, Hershkoff went “above and beyond the call of duty.” Hershkoff and five other awardees were honored on April 23. In her acceptance, Hershkoff reflected on her students: “Whether they work in government or in legal services, at a private firm or in industry, whether they teach or run companies, my students are using the law in creative and important ways.” She added, “They are trying to make the world more joyful, and they know that with shared hard work, we can use law to make the world a better place.”

Capital News The Law School’s already robust presence in Washington, DC, grows even stronger this year as two Law School professors are taking leaves to serve in national government: Ryan Goodman, Anne and Joel Ehrenkranz Professor of Law, has been appointed special counsel to the general counsel of the US Department of Defense, while Professor Troy McKenzie ’00 has joined the Department of Justice Office of Legal Counsel as a deputy assistant attorney general. Goodman In his new role, Goodman will focus primarily on national security law and the law of armed conflict. Goodman co-founded Just Security, a blog for the rigorous analysis of law, rights, and national security, in 2013. He previously served at the US Department of State, the International Criminal Tribunal for the former Yugoslavia, and nongovernmental organizations in India, South Africa, Switzerland, Thailand, and the United States. Goodman clerked for Judge Stephen Reinhardt of the US Court of Appeals for the Ninth Circuit. McKenzie McKenzie, whose role at the Department of Justice began this past spring, is a scholar of bankruptcy, civil procedure, complex litigation, and the federal courts. In February, he was elected to the prestigious American Law Institute. Last year, McKenzie became co-faculty director of the Law School’s Center on Civil Justice, which is dedicated to the study of the US civil justice system. Before joining the Law School, McKenzie was a litigation associate in the New York office of Debevoise & Plimpton. He clerked for Judge Pierre Leval of the US Court of Appeals for the Second Circuit and Justice John Paul Stevens of the US Supreme Court.

Continued from page 28 In a Washington Post op-ed, Ryan Goodman and two co-authors listed five principles Congress should follow when authorizing use of force. Samuel Issacharoff was awarded the inaugural Appellate Advocacy Award by the Pound Civil Justice Institute. Arthur Miller was named associate dean and director of the Tisch Institute for Sports Management, Media, and Business and received the 2015 Brandeis Medal from the Louis D. Brandeis School of Law. Richard Pildes is scholarly co-chair of the National Constitution Center’s three-year project Coalition of Freedom, which aims to raise awareness of constitutional rights. In a New York Times op-ed, Richard Revesz and Jack Lienke ’11 praise President Obama’s Clean Power Plan for correcting a major error in the Clean Air Act. Catherine Sharkey was named a member of the Administrative Conference of the United States. Anthony Thompson was appointed to Governor Cuomo’s new Council on Community Re-Entry and Reintegration.

ew York University gave Helen Hershkoff, Herbert M. and Svetlana Wachtell Professor of Constitutional Law and Civil Liberties, its 2014–15 Distinguished Teaching Award for “exceptional teaching inside and outside of the classroom setting.” A co-author of Civil Procedure: Cases and Materials, Hershkoff teaches Procedure to first-year law students as well as Federal Courts and the Federal System, courses noted for their challenging material. She also serves as co-director of the Arthur Garfield Hays Civil Liberties Program and as faculty adviser to the NYU Journal of Legislation and Public Policy. Prior to coming to NYU Law almost two decades ago, she worked as a staff attorney with the Legal Aid Society of New York and as an associate legal director of the American Civil Liberties Union. In glowing letters to the selection committee, current and former students applauded Hershkoff’s manner in the classroom. Alessandra Baniel-Stark JD/MA ’16, a Procedure student, wrote, “Professor Hershkoff has figured out ways to ensure that while her students still learn the material and feel some of the heat of the Socratic system, they have a fair opportunity to excel at every turn.”