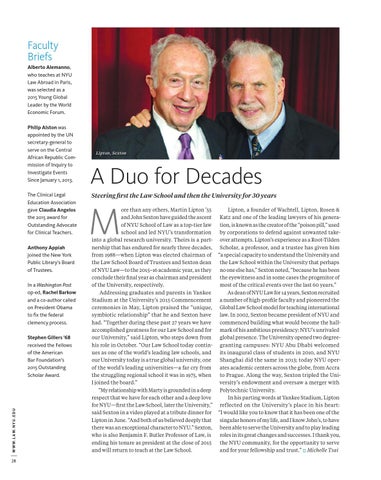 Faculty Briefs Alberto Alemanno, who teaches at NYU Law Abroad in Paris, was selected as a 2015 Young Global Leader by the World Economic Forum. Philip Alston was appointed by the UN secretary-general to serve on the Central African Republic Commission of Inquiry to Investigate Events Since January 1, 2013. The Clinical Legal Education Association gave Claudia Angelos the 2015 award for Outstanding Advocate for Clinical Teachers. Anthony Appiah joined the New York Public Library’s Board of Trustees. In a Washington Post op-ed, Rachel Barkow and a co-author called on President Obama to fix the federal clemency process.

ore than any others, Martin Lipton ’55 and John Sexton have guided the ascent of NYU School of Law as a top-tier law school and led NYU’s transformation into a global research university. Theirs is a partnership that has endured for nearly three decades, from 1988—when Lipton was elected chairman of the Law School Board of Trustees and Sexton dean of NYU Law—to the 2015–16 academic year, as they conclude their final year as chairman and president of the University, respectively. Addressing graduates and parents in Yankee Stadium at the University’s 2015 Commencement ceremonies in May, Lipton praised the “unique, symbiotic relationship” that he and Sexton have had. “Together during these past 27 years we have accomplished greatness for our Law School and for our University,” said Lipton, who steps down from his role in October. “Our Law School today continues as one of the world’s leading law schools, and our University today is a true global university, one of the world’s leading universities—a far cry from the struggling regional school it was in 1975, when I joined the board.” “My relationship with Marty is grounded in a deep respect that we have for each other and a deep love for NYU—first the Law School, later the University,” said Sexton in a video played at a tribute dinner for Lipton in June. “And both of us believed deeply that there was an exceptional character to NYU.” Sexton, who is also Benjamin F. Butler Professor of Law, is ending his tenure as president at the close of 2015 and will return to teach at the Law School.

Lipton, a founder of Wachtell, Lipton, Rosen & Katz and one of the leading lawyers of his generation, is known as the creator of the “poison pill,” used by corporations to defend against unwanted takeover attempts. Lipton’s experience as a Root-Tilden Scholar, a professor, and a trustee has given him “a special capacity to understand the University and the Law School within the University that perhaps no one else has,” Sexton noted, “because he has been the eyewitness and in some cases the progenitor of most of the critical events over the last 60 years.” As dean of NYU Law for 14 years, Sexton recruited a number of high-profile faculty and pioneered the Global Law School model for teaching international law. In 2002, Sexton became president of NYU and commenced building what would become the hallmark of his ambitious presidency: NYU’s unrivaled global presence. The University opened two degreegranting campuses: NYU Abu Dhabi welcomed its inaugural class of students in 2010, and NYU Shanghai did the same in 2013; today NYU operates academic centers across the globe, from Accra to Prague. Along the way, Sexton tripled the University’s endowment and oversaw a merger with Polytechnic University. In his parting words at Yankee Stadium, Lipton reflected on the University’s place in his heart: “I would like you to know that it has been one of the singular honors of my life, and I know John’s, to have been able to serve the University and to play leading roles in its great changes and successes. I thank you, the NYU community, for the opportunity to serve and for your fellowship and trust.” Michelle Tsai