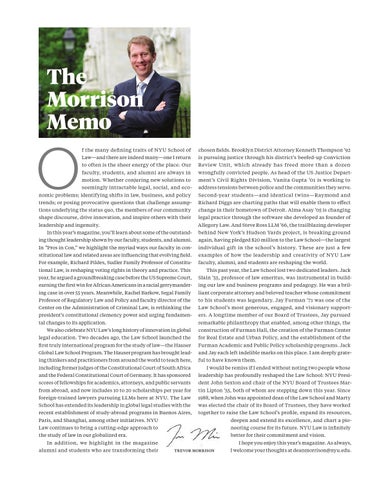 f the many defining traits of NYU School of

Law—and there are indeed many—one I return

is pursuing justice through his district’s beefed-up Conviction

to often is the sheer energy of the place. Our

Review Unit, which already has freed more than a dozen

faculty, students, and alumni are always in

wrongfully convicted people. As head of the US Justice Depart-

motion. Whether conjuring new solutions to

address tensions between police and the communities they serve.

Richard Diggs are charting paths that will enable them to effect

tions underlying the status quo, the members of our community

change in their hometown of Detroit. Alma Asay ’05 is changing

shape discourse, drive innovation, and inspire others with their

legal practice through the software she developed as founder of

In this year’s magazine, you’ll learn about some of the outstand-

ing thought leadership shown by our faculty, students, and alumni.

again, having pledged $20 million to the Law School—the largest

In “Pros in Con,” we highlight the myriad ways our faculty in con-

individual gift in the school’s history. These are just a few

stitutional law and related areas are influencing that evolving field.

examples of how the leadership and creativity of NYU Law

faculty, alumni, and students are reshaping the world.

tional Law, is reshaping voting rights in theory and practice. This

year, he argued a groundbreaking case before the US Supreme Court,

Slain ’55, professor of law emeritus, was instrumental in build-

earning the first win for African Americans in a racial gerrymander-

ing our law and business programs and pedagogy. He was a bril-

Professor of Regulatory Law and Policy and faculty director of the

to his students was legendary. Jay Furman ’71 was one of the

Center on the Administration of Criminal Law, is rethinking the

ers. A longtime member of our Board of Trustees, Jay pursued

tal changes to its application.

remarkable philanthropy that enabled, among other things, the

construction of Furman Hall, the creation of the Furman Center

legal education. Two decades ago, the Law School launched the

for Real Estate and Urban Policy, and the establishment of the

first truly international program for the study of law—the Hauser

and Jay each left indelible marks on this place. I am deeply grate-

ing thinkers and practitioners from around the world to teach here,

ful to have known them.

including former judges of the Constitutional Court of South Africa

and the Federal Constitutional Court of Germany. It has sponsored

scores of fellowships for academics, attorneys, and public servants

from abroad, and now includes 10 to 20 scholarships per year for

tin Lipton ’55, both of whom are stepping down this year. Since

1988, when John was appointed dean of the Law School and Marty

School has extended its leadership in global legal studies with the

was elected the chair of its Board of Trustees, they have worked

together to raise the Law School’s profile, expand its resources,

Paris, and Shanghai, among other initiatives. NYU

deepen and extend its excellence, and chart a pio-

Law continues to bring a cutting-edge approach to

neering course for its future. NYU Law is infinitely

the study of law in our globalized era.

better for their commitment and vision.

In addition, we highlight in the magazine alumni and students who are transforming their

I hope you enjoy this year’s magazine. As always, trevor morrison

I welcome your thoughts at deanmorrison@nyu.edu.