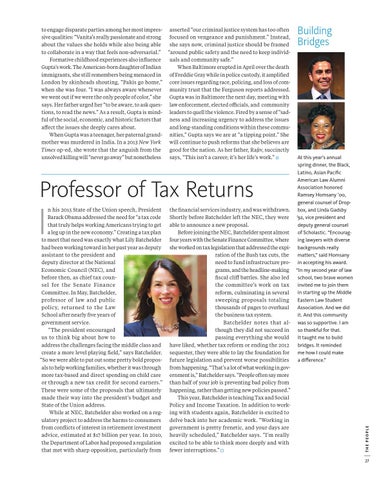 asserted “our criminal justice system has too often focused on vengeance and punishment.” Instead, she says now, criminal justice should be framed “around public safety and the need to keep individuals and community safe.” When Baltimore erupted in April over the death of Freddie Gray while in police custody, it amplified core issues regarding race, policing, and loss of community trust that the Ferguson reports addressed. Gupta was in Baltimore the next day, meeting with law enforcement, elected officials, and community leaders to quell the violence. Fired by a sense of “sadness and increasing urgency to address the issues and long-standing conditions within these communities,” Gupta says we are at “a tipping point.” She will continue to push reforms that she believes are good for the nation. As her father, Rajiv, succinctly says, “This isn’t a career; it’s her life’s work.”

n his 2015 State of the Union speech, President Barack Obama addressed the need for “a tax code that truly helps working Americans trying to get a leg up in the new economy.” Creating a tax plan to meet that need was exactly what Lily Batchelder had been working toward in her past year as deputy assistant to the president and deputy director at the National Economic Council (NEC), and before then, as chief tax counsel for the Senate Finance Committee. In May, Batchelder, professor of law and public policy, returned to the Law School after nearly five years of government service. “The president encouraged us to think big about how to address the challenges facing the middle class and create a more level playing field,” says Batchelder. “So we were able to put out some pretty bold proposals to help working families, whether it was through more tax-based and direct spending on child care or through a new tax credit for second earners.” These were some of the proposals that ultimately made their way into the president’s budget and State of the Union address. While at NEC, Batchelder also worked on a regulatory project to address the harms to consumers from conflicts of interest in retirement investment advice, estimated at $17 billion per year. In 2010, the Department of Labor had proposed a regulation that met with sharp opposition, particularly from

the financial services industry, and was withdrawn. Shortly before Batchelder left the NEC, they were able to announce a new proposal. Before joining the NEC, Batchelder spent almost four years with the Senate Finance Committee, where she worked on tax legislation that addressed the expiration of the Bush tax cuts, the need to fund infrastructure programs, and the headline-making fiscal cliff battles. She also led the committee’s work on tax reform, culminating in several sweeping proposals totaling thousands of pages to overhaul the business tax system. Batchelder notes that although they did not succeed in passing everything she would have liked, whether tax reform or ending the 2012 sequester, they were able to lay the foundation for future legislation and prevent worse possibilities from happening. “That’s a lot of what working in government is,” Batchelder says. “People often say more than half of your job is preventing bad policy from happening, rather than getting new policies passed.” This year, Batchelder is teaching Tax and Social Policy and Income Taxation. In addition to working with students again, Batchelder is excited to delve back into her academic work. “Working in government is pretty frenetic, and your days are heavily scheduled,” Batchelder says. “I’m really excited to be able to think more deeply and with fewer interruptions.”

At this year’s annual spring dinner, the Black, Latino, Asian Pacific American Law Alumni Association honored Ramsey Homsany ’00, general counsel of Dropbox, and Linda Gadsby ’92, vice president and deputy general counsel of Scholastic. “Encouraging lawyers with diverse backgrounds really matters,” said Homsany in accepting his award. “In my second year of law school, two brave women invited me to join them in starting up the Middle Eastern Law Student Association. And we did it. And this community was so supportive. I am so thankful for that. It taught me to build bridges. It reminded me how I could make a difference.”

to engage disparate parties among her most impressive qualities: “Vanita’s really passionate and strong about the values she holds while also being able to collaborate in a way that feels non-adversarial.” Formative childhood experiences also influence Gupta’s work. The American-born daughter of Indian immigrants, she still remembers being menaced in London by skinheads shouting, “Pakis go home,” when she was four. “I was always aware whenever we went out if we were the only people of color,” she says. Her father urged her “to be aware, to ask questions, to read the news.” As a result, Gupta is mindful of the social, economic, and historic factors that affect the issues she deeply cares about. When Gupta was a teenager, her paternal grandmother was murdered in India. In a 2013 New York Times op-ed, she wrote that the anguish from the unsolved killing will “never go away” but nonetheless