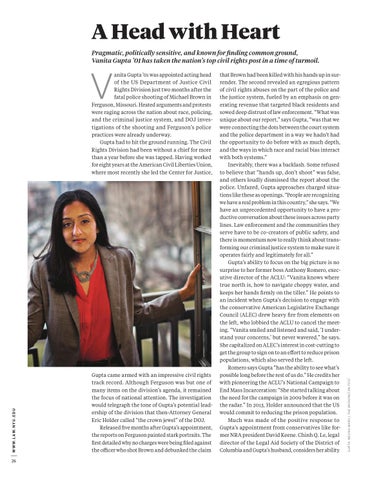 A Head with Heart

anita Gupta ’01 was appointed acting head of the US Department of Justice Civil Rights Division just two months after the fatal police shooting of Michael Brown in Ferguson, Missouri. Heated arguments and protests were raging across the nation about race, policing, and the criminal justice system, and DOJ investigations of the shooting and Ferguson’s police practices were already underway. Gupta had to hit the ground running. The Civil Rights Division had been without a chief for more than a year before she was tapped. Having worked for eight years at the American Civil Liberties Union, where most recently she led the Center for Justice,

Gupta came armed with an impressive civil rights track record. Although Ferguson was but one of many items on the division’s agenda, it remained the focus of national attention. The investigation would telegraph the tone of Gupta’s potential leadership of the division that then-Attorney General Eric Holder called “the crown jewel” of the DOJ. Released five months after Gupta’s appointment, the reports on Ferguson painted stark portraits. The first detailed why no charges were being filed against the officer who shot Brown and debunked the claim

that Brown had been killed with his hands up in surrender. The second revealed an egregious pattern of civil rights abuses on the part of the police and the justice system, fueled by an emphasis on generating revenue that targeted black residents and sowed deep distrust of law enforcement. “What was unique about our report,” says Gupta, “was that we were connecting the dots between the court system and the police department in a way we hadn’t had the opportunity to do before with as much depth, and the ways in which race and racial bias interact with both systems.” Inevitably, there was a backlash. Some refused to believe that “hands up, don’t shoot” was false, and others loudly dismissed the report about the police. Unfazed, Gupta approaches charged situations like these as openings. “People are recognizing we have a real problem in this country,” she says. “We have an unprecedented opportunity to have a productive conversation about these issues across party lines. Law enforcement and the communities they serve have to be co-creators of public safety, and there is momentum now to really think about transforming our criminal justice system to make sure it operates fairly and legitimately for all.” Gupta’s ability to focus on the big picture is no surprise to her former boss Anthony Romero, executive director of the ACLU: “Vanita knows where true north is, how to navigate choppy water, and keeps her hands firmly on the tiller.” He points to an incident when Gupta’s decision to engage with the conservative American Legislative Exchange Council (ALEC) drew heavy fire from elements on the left, who lobbied the ACLU to cancel the meeting. “Vanita smiled and listened and said, ’I understand your concerns,’ but never wavered,” he says. She capitalized on ALEC’s interest in cost-cutting to get the group to sign on to an effort to reduce prison populations, which also served the left. Romero says Gupta “has the ability to see what’s possible long before the rest of us do.” He credits her with pioneering the ACLU’s National Campaign to End Mass Incarceration: “She started talking about the need for the campaign in 2009 before it was on the radar.” In 2013, Holder announced that the US would commit to reducing the prison population. Much was made of the positive response to Gupta’s appointment from conservatives like former NRA president David Keene. Chinh Q. Le, legal director of the Legal Aid Society of the District of Columbia and Gupta’s husband, considers her ability