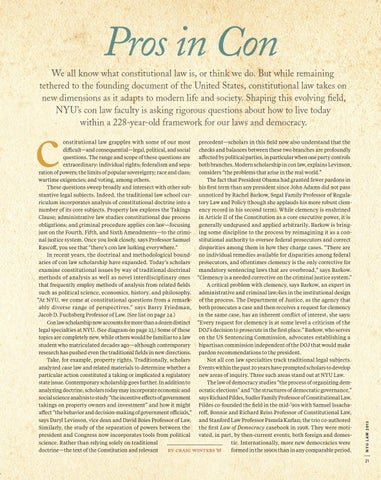 We all know what constitutional law is, or think we do. But while remaining tethered to the founding document of the United States, constitutional law takes on new dimensions as it adapts to modern life and society. Shaping this evolving field, NYU’s con law faculty is asking rigorous questions about how to live today within a 228-year-old framework for our laws and democracy.

onstitutional law grapples with some of our most precedent—scholars in this field now also understand that the difficult—and consequential—legal, political, and social checks and balances between these two branches are profoundly questions. The range and scope of these questions are affected by political parties, in particular when one party controls extraordinary: individual rights; federalism and sepa- both branches. Modern scholarship in con law, explains Levinson, ration of powers; the limits of popular sovereignty; race and class; considers “the problems that arise in the real world.” wartime exigencies; and voting, among others. The fact that President Obama had granted fewer pardons in These questions sweep broadly and intersect with other sub- his first term than any president since John Adams did not pass stantive legal subjects. Indeed, the traditional law school cur- unnoticed by Rachel Barkow, Segal Family Professor of Regulariculum incorporates analysis of constitutional doctrine into a tory Law and Policy (though she applauds his more robust clemnumber of its core subjects. Property law explores the Takings ency record in his second term). While clemency is enshrined Clause; administrative law studies constitutional due process in Article II of the Constitution as a core executive power, it is obligations; and criminal procedure applies con law—focusing generally underused and applied arbitrarily. Barkow is bringjust on the Fourth, Fifth, and Sixth Amendments—to the crimi- ing some discipline to the process by reimagining it as a constitutional authority to oversee federal prosecutors and correct nal justice system. Once you look closely, says Professor Samuel disparities among them in how they charge cases. “There are Rascoff, you see that “there’s con law lurking everywhere.” In recent years, the doctrinal and methodological bound- no individual remedies available for disparities among federal aries of con law scholarship have expanded. Today’s scholars prosecutors, and oftentimes clemency is the only corrective for examine constitutional issues by way of traditional doctrinal mandatory sentencing laws that are overbroad,” says Barkow. methods of analysis as well as novel interdisciplinary ones “Clemency is a needed corrective on the criminal justice system.” that frequently employ methods of analysis from related fields A critical problem with clemency, says Barkow, an expert in such as political science, economics, history, and philosophy. administrative and criminal law, lies in the institutional design “At NYU, we come at constitutional questions from a remark- of the process. The Department of Justice, as the agency that ably diverse range of perspectives,” says Barry Friedman, both prosecutes a case and then receives a request for clemency Jacob D. Fuchsberg Professor of Law. (See list on page 24.) in the same case, has an inherent conflict of interest, she says: Con law scholarship now accounts for more than a dozen distinct “Every request for clemency is at some level a criticism of the legal specialties at NYU. (See diagram on page 23.) Some of these DOJ’s decision to prosecute in the first place.” Barkow, who serves on the US Sentencing Commission, advocates establishing a topics are completely new, while others would be familiar to a law bipartisan commission independent of the DOJ that would make student who matriculated decades ago—although contemporary pardon recommendations to the president. research has pushed even the traditional fields in new directions. Take, for example, property rights. Traditionally, scholars Not all con law specialties track traditional legal subjects. analyzed case law and related materials to determine whether a Events within the past 20 years have prompted scholars to develop particular action constituted a taking or implicated a regulatory new areas of inquiry. Three such areas stand out at NYU Law. state issue. Contemporary scholarship goes further. In addition to The law of democracy studies “the process of organizing demanalyzing doctrine, scholars today may incorporate economic and ocratic elections” and “the structures of democratic governance,” social science analysis to study “the incentive effects of government says Richard Pildes, Sudler Family Professor of Constitutional Law. takings on property owners and investment” and how it might Pildes co-founded the field in the mid-’90s with Samuel Issachaaffect “the behavior and decision-making of government officials,” roff, Bonnie and Richard Reiss Professor of Constitutional Law, says Daryl Levinson, vice dean and David Boies Professor of Law. and Stanford Law Professor Pamela Karlan; the trio co-authored Similarly, the study of the separation of powers between the the first Law of Democracy casebook in 1998. They were motivated, in part, by then-current events, both foreign and domespresident and Congress now incorporates tools from political science. Rather than relying solely on traditional tic. Internationally, more new democracies were doctrine—the text of the Constitution and relevant by craig winters ’07 formed in the 1990s than in any comparable period,