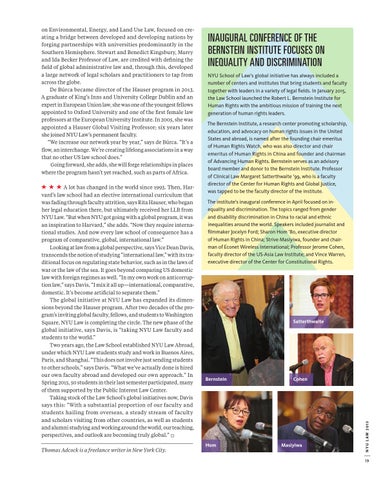 vard’s law school had an elective international curriculum that was fading through faculty attrition, says Rita Hauser, who began her legal education there, but ultimately received her LLB from NYU Law. “But when NYU got going with a global program, it was an inspiration to Harvard,” she adds. “Now they require international studies. And now every law school of consequence has a program of comparative, global, international law.” Looking at law from a global perspective, says Vice Dean Davis, transcends the notion of studying “international law,” with its traditional focus on regulating state behavior, such as in the laws of war or the law of the sea. It goes beyond comparing US domestic law with foreign regimes as well. “In my own work on anticorruption law,” says Davis, “I mix it all up—international, comparative, domestic. It’s become artificial to separate them.” The global initiative at NYU Law has expanded its dimensions beyond the Hauser program. After two decades of the program’s inviting global faculty, fellows, and students to Washington Square, NYU Law is completing the circle. The new phase of the global initiative, says Davis, is “taking NYU Law faculty and students to the world.” Two years ago, the Law School established NYU Law Abroad, under which NYU Law students study and work in Buenos Aires, Paris, and Shanghai. “This does not involve just sending students to other schools,” says Davis. “What we’ve actually done is hired our own faculty abroad and developed our own approach.” In Spring 2015, 50 students in their last semester participated, many of them supported by the Public Interest Law Center. Taking stock of the Law School’s global initiatives now, Davis says this: “With a substantial proportion of our faculty and students hailing from overseas, a steady stream of faculty and scholars visiting from other countries, as well as students and alumni studying and working around the world, our teaching, perspectives, and outlook are becoming truly global.” Thomas Adcock is a freelance writer in New York City.

NYU School of Law’s global initiative has always included a number of centers and institutes that bring students and faculty together with leaders in a variety of legal fields. In January 2015, the Law School launched the Robert L. Bernstein Institute for Human Rights with the ambitious mission of training the next generation of human rights leaders. The Bernstein Institute, a research center promoting scholarship, education, and advocacy on human rights issues in the United States and abroad, is named after the founding chair emeritus of Human Rights Watch, who was also director and chair emeritus of Human Rights in China and founder and chairman of Advancing Human Rights. Bernstein serves as an advisory board member and donor to the Bernstein Institute. Professor of Clinical Law Margaret Satterthwaite ’99, who is a faculty director of the Center for Human Rights and Global Justice, was tapped to be the faculty director of the institute. The institute’s inaugural conference in April focused on inequality and discrimination. The topics ranged from gender and disability discrimination in China to racial and ethnic inequalities around the world. Speakers included journalist and filmmaker Jocelyn Ford; Sharon Hom ’80, executive director of Human Rights in China; Strive Masiyiwa, founder and chairman of Econet Wireless International; Professor Jerome Cohen, faculty director of the US-Asia Law Institute; and Vince Warren, executive director of the Center for Constitutional Rights.

INAUGURAL CONFERENCE OF THE BERNSTEIN INSTITUTE FOCUSES ON INEQUALITY AND DISCRIMINATION

on Environmental, Energy, and Land Use Law, focused on creating a bridge between developed and developing nations by forging partnerships with universities predominantly in the Southern Hemisphere. Stewart and Benedict Kingsbury, Murry and Ida Becker Professor of Law, are credited with defining the field of global administrative law and, through this, developed a large network of legal scholars and practitioners to tap from across the globe. De Búrca became director of the Hauser program in 2013. A graduate of King’s Inns and University College Dublin and an expert in European Union law, she was one of the youngest fellows appointed to Oxford University and one of the first female law professors at the European University Institute. In 2005, she was appointed a Hauser Global Visiting Professor; six years later she joined NYU Law’s permanent faculty. “We increase our network year by year,” says de Búrca. “It’s a flow, an interchange. We’re creating lifelong associations in a way that no other US law school does.” Going forward, she adds, she will forge relationships in places where the program hasn’t yet reached, such as parts of Africa.