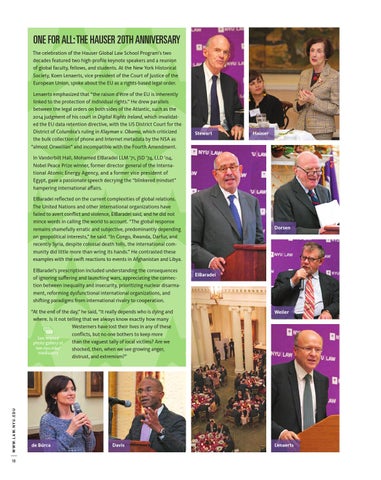 The celebration of the Hauser Global Law School Program’s two decades featured two high-profile keynote speakers and a reunion of global faculty, fellows, and students. At the New York Historical Society, Koen Lenaerts, vice president of the Court of Justice of the European Union, spoke about the EU as a rights-based legal order.

Lenaerts emphasized that “the raison d’être of the EU is inherently linked to the protection of individual rights.” He drew parallels between the legal orders on both sides of the Atlantic, such as the 2014 judgment of his court in Digital Rights Ireland, which invalidated the EU data retention directive, with the US District Court for the District of Columbia’s ruling in Klayman v. Obama, which criticized the bulk collection of phone and Internet metadata by the NSA as “almost Orwellian” and incompatible with the Fourth Amendment.

ElBaradei reflected on the current complexities of global relations. The United Nations and other international organizations have failed to avert conflict and violence, ElBaradei said, and he did not mince words in calling the world to account. “The global response remains shamefully erratic and subjective, predominantly depending on geopolitical interests,” he said. “In Congo, Rwanda, Darfur, and recently Syria, despite colossal death tolls, the international community did little more than wring its hands.” He contrasted these examples with the swift reactions to events in Afghanistan and Libya.

“At the end of the day,” he said, “it really depends who is dying and where. Is it not telling that we always know exactly how many Westerners have lost their lives in any of these conflicts, but no one bothers to keep more See related than the vaguest tally of local victims? Are we photo gallery at law.nyu.edu/ shocked, then, when we see growing anger, media2015 distrust, and extremism?”