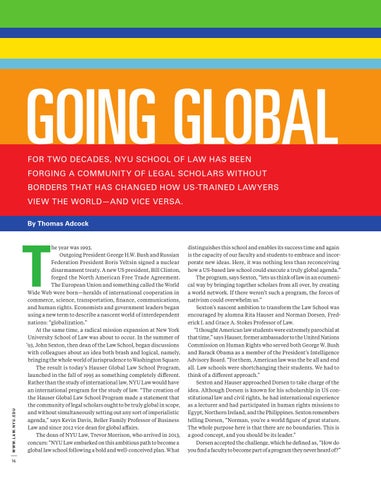 GOING GLOBAL FOR TWO DECADES, NYU SCHOOL OF LAW HAS BEEN

FORGING A COMMUNITY OF LEGAL SCHOLARS WITHOUT BORDERS THAT HAS CHANGED HOW US-TRAINED LAWYERS VIEW THE WORLD—AND VICE VERSA. By Thomas Adcock

he year was 1993. Outgoing President George H.W. Bush and Russian Federation President Boris Yeltsin signed a nuclear disarmament treaty. A new US president, Bill Clinton, forged the North American Free Trade Agreement. The European Union and something called the World Wide Web were born—heralds of international cooperation in commerce, science, transportation, finance, communications, and human rights. Economists and government leaders began using a new term to describe a nascent world of interdependent nations: “globalization.” At the same time, a radical mission expansion at New York University School of Law was about to occur. In the summer of ’93, John Sexton, then dean of the Law School, began discussions with colleagues about an idea both brash and logical, namely, bringing the whole world of jurisprudence to Washington Square. The result is today’s Hauser Global Law School Program, launched in the fall of 1995 as something completely different. Rather than the study of international law, NYU Law would have an international program for the study of law. “The creation of the Hauser Global Law School Program made a statement that the community of legal scholars ought to be truly global in scope, and without simultaneously setting out any sort of imperialistic agenda,” says Kevin Davis, Beller Family Professor of Business Law and since 2012 vice dean for global affairs. The dean of NYU Law, Trevor Morrison, who arrived in 2013, concurs: “NYU Law embarked on this ambitious path to become a global law school following a bold and well-conceived plan. What

distinguishes this school and enables its success time and again is the capacity of our faculty and students to embrace and incorporate new ideas. Here, it was nothing less than reconceiving how a US-based law school could execute a truly global agenda.” The program, says Sexton, “lets us think of law in an ecumenical way by bringing together scholars from all over, by creating a world network. If there weren’t such a program, the forces of nativism could overwhelm us.” Sexton’s nascent ambition to transform the Law School was encouraged by alumna Rita Hauser and Norman Dorsen, Frederick I. and Grace A. Stokes Professor of Law. “I thought American law students were extremely parochial at that time,” says Hauser, former ambassador to the United Nations Commission on Human Rights who served both George W. Bush and Barack Obama as a member of the President’s Intelligence Advisory Board. “For them, American law was the be all and end all. Law schools were shortchanging their students. We had to think of a different approach.” Sexton and Hauser approached Dorsen to take charge of the idea. Although Dorsen is known for his scholarship in US constitutional law and civil rights, he had international experience as a lecturer and had participated in human rights missions to Egypt, Northern Ireland, and the Philippines. Sexton remembers telling Dorsen, “Norman, you’re a world figure of great stature. The whole purpose here is that there are no boundaries. This is a good concept, and you should be its leader.” Dorsen accepted the challenge, which he defined as, “How do you find a faculty to become part of a program they never heard of?”