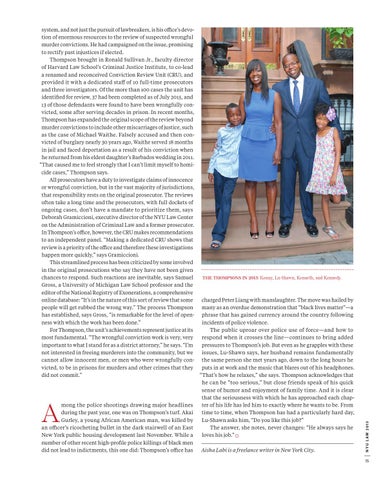 charged Peter Liang with manslaughter. The move was hailed by many as an overdue demonstration that “black lives matter”—a phrase that has gained currency around the country following incidents of police violence. The public uproar over police use of force—and how to respond when it crosses the line—continues to bring added pressures to Thompson’s job. But even as he grapples with these issues, Lu-Shawn says, her husband remains fundamentally the same person she met years ago, down to the long hours he puts in at work and the music that blares out of his headphones. “That’s how he relaxes,” she says. Thompson acknowledges that he can be “too serious,” but close friends speak of his quick sense of humor and enjoyment of family time. And it is clear that the seriousness with which he has approached each chapter of his life has led him to exactly where he wants to be. From time to time, when Thompson has had a particularly hard day, Lu-Shawn asks him, “Do you like this job?” The answer, she notes, never changes: “He always says he loves his job.” Aisha Labi is a freelance writer in New York City.

mong the police shootings drawing major headlines during the past year, one was on Thompson’s turf. Akai Gurley, a young African American man, was killed by an officer’s ricocheting bullet in the dark stairwell of an East New York public housing development last November. While a number of other recent high-profile police killings of black men did not lead to indictments, this one did: Thompson’s office has

THE THOMPSONS IN 2013: Kenny, Lu-Shawn, Kenneth, and Kennedy.

system, and not just the pursuit of lawbreakers, is his office’s devotion of enormous resources to the review of suspected wrongful murder convictions. He had campaigned on the issue, promising to rectify past injustices if elected. Thompson brought in Ronald Sullivan Jr., faculty director of Harvard Law School’s Criminal Justice Institute, to co-lead a renamed and reconceived Conviction Review Unit (CRU), and provided it with a dedicated staff of 10 full-time prosecutors and three investigators. Of the more than 100 cases the unit has identified for review, 37 had been completed as of July 2015, and 13 of those defendants were found to have been wrongfully convicted, some after serving decades in prison. In recent months, Thompson has expanded the original scope of the review beyond murder convictions to include other miscarriages of justice, such as the case of Michael Waithe. Falsely accused and then convicted of burglary nearly 30 years ago, Waithe served 18 months in jail and faced deportation as a result of his conviction when he returned from his eldest daughter’s Barbados wedding in 2011. “That caused me to feel strongly that I can’t limit myself to homicide cases,” Thompson says. All prosecutors have a duty to investigate claims of innocence or wrongful conviction, but in the vast majority of jurisdictions, that responsibility rests on the original prosecutor. The reviews often take a long time and the prosecutors, with full dockets of ongoing cases, don’t have a mandate to prioritize them, says Deborah Gramiccioni, executive director of the NYU Law Center on the Administration of Criminal Law and a former prosecutor. In Thompson’s office, however, the CRU makes recommendations to an independent panel. “Making a dedicated CRU shows that review is a priority of the office and therefore these investigations happen more quickly,” says Gramiccioni. This streamlined process has been criticized by some involved in the original prosecutions who say they have not been given chances to respond. Such reactions are inevitable, says Samuel Gross, a University of Michigan Law School professor and the editor of the National Registry of Exonerations, a comprehensive online database: “It’s in the nature of this sort of review that some people will get rubbed the wrong way.” The process Thompson has established, says Gross, “is remarkable for the level of openness with which the work has been done.” For Thompson, the unit’s achievements represent justice at its most fundamental. “The wrongful conviction work is very, very important to what I stand for as a district attorney,” he says. “I’m not interested in freeing murderers into the community, but we cannot allow innocent men, or men who were wrongfully convicted, to be in prisons for murders and other crimes that they did not commit.”