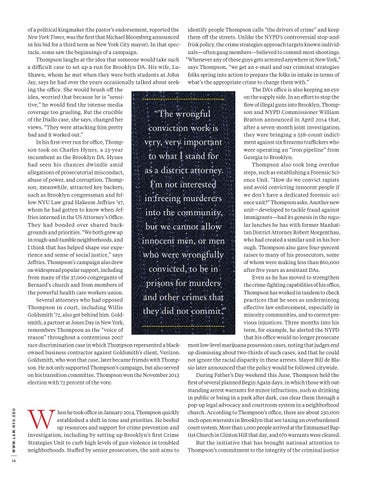 of a political kingmaker (the pastor’s endorsement, reported the New York Times, was the first that Michael Bloomberg announced in his bid for a third term as New York City mayor). In that spectacle, some saw the beginnings of a campaign. Thompson laughs at the idea that someone would take such a difficult case to set up a run for Brooklyn DA. His wife, LuShawn, whom he met when they were both students at John Jay, says he had over the years occasionally talked about seeking the office. She would brush off the idea, worried that because he is “sensitive,” he would find the intense media coverage too grueling. But the crucible of the Diallo case, she says, changed her views. “They were attacking him pretty bad and it worked out.” In his first-ever run for office, Thompson took on Charles Hynes, a 23-year incumbent as the Brooklyn DA. Hynes had seen his chances dwindle amid allegations of prosecutorial misconduct, abuse of power, and corruption. Thompson, meanwhile, attracted key backers, such as Brooklyn congressman and fellow NYU Law grad Hakeem Jeffries ’97, whom he had gotten to know when Jeffries interned in the US Attorney’s Office. They had bonded over shared backgrounds and priorities. “We both grew up in rough-and-tumble neighborhoods, and I think that has helped shape our experience and sense of social justice,” says Jeffries. Thompson’s campaign also drew on widespread popular support, including from many of the 37,000 congregants of Bernard’s church and from members of the powerful health care workers union. Several attorneys who had opposed Thompson in court, including Willis Goldsmith ’72, also got behind him. Goldsmith, a partner at Jones Day in New York, remembers Thompson as the “voice of reason” throughout a contentious 2007 race discrimination case in which Thompson represented a blackowned business contractor against Goldsmith’s client, Verizon. Goldsmith, who won that case, later became friends with Thompson. He not only supported Thompson’s campaign, but also served on his transition committee. Thompson won the November 2013 election with 72 percent of the vote.

identify people Thompson calls “the drivers of crime” and keep them off the streets. Unlike the NYPD’s controversial stop-andfrisk policy, the crime strategies approach targets known individuals—often gang members—believed to commit most shootings. “Whenever any of these guys gets arrested anywhere in New York,” says Thompson, “we get an e-mail and our criminal strategies folks spring into action to prepare the folks in intake in terms of what’s the appropriate crime to charge them with.” The DA’s office is also keeping an eye on the supply side. In an effort to stop the flow of illegal guns into Brooklyn, Thompson and NYPD Commissioner William Bratton announced in April 2014 that, after a seven-month joint investigation, they were bringing a 558-count indictment against six firearms traffickers who were operating an “iron pipeline” from Georgia to Brooklyn. Thompson also took long overdue steps, such as establishing a Forensic Science Unit. “How do we convict rapists and avoid convicting innocent people if we don’t have a dedicated forensic science unit?” Thompson asks. Another new unit—developed to tackle fraud against immigrants—had its genesis in the regular lunches he has with former Manhattan District Attorney Robert Morgenthau, who had created a similar unit in his borough. Thompson also gave four-percent raises to many of his prosecutors, some of whom were making less than $60,000 after five years as assistant DAs. Even as he has moved to strengthen the crime-fighting capabilities of his office, Thompson has worked in tandem to check practices that he sees as undermining effective law enforcement, especially in minority communities, and to correct previous injustices. Three months into his term, for example, he alerted the NYPD that his office would no longer prosecute most low-level marijuana possession cases, noting that judges end up dismissing about two-thirds of such cases, and that he could not ignore the racial disparity in these arrests. Mayor Bill de Blasio later announced that the policy would be followed citywide. During Father’s Day weekend this June, Thompson held the first of several planned Begin Again days, in which those with outstanding arrest warrants for minor infractions, such as drinking in public or being in a park after dark, can clear them through a pop-up legal advocacy and courtroom system in a neighborhood church. According to Thompson’s office, there are about 250,000 such open warrants in Brooklyn that are taxing an overburdened court system. More than 1,000 people arrived at the Emmanuel Baptist Church in Clinton Hill that day, and 670 warrants were cleared. But the initiative that has brought national attention to Thompson’s commitment to the integrity of the criminal justice

very, very important to what I stand for

into the community, but we cannot allow

innocent men, or men who were wrongfully convicted, to be in

and other crimes that

they did not commit.”

hen he took office in January 2014, Thompson quickly established a shift in tone and priorities. He beefed up resources and support for crime prevention and investigation, including by setting up Brooklyn’s first Crime Strategies Unit to curb high levels of gun violence in troubled neighborhoods. Staffed by senior prosecutors, the unit aims to