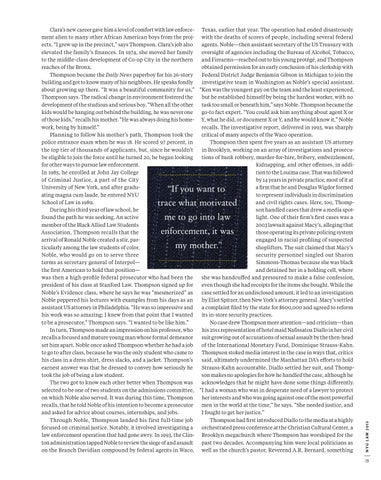 Clara’s new career gave him a level of comfort with law enforcement alien to many other African American boys from the projects. “I grew up in the precinct,” says Thompson. Clara’s job also elevated the family’s finances. In 1974, she moved her family to the middle-class development of Co-op City in the northern reaches of the Bronx. Thompson became the Daily News paperboy for his 26-story building and got to know many of his neighbors. He speaks fondly about growing up there. “It was a beautiful community for us,” Thompson says. The radical change in environment fostered the development of the studious and serious boy. “When all the other kids would be hanging out behind the building, he was never one of those kids,” recalls his mother. “He was always doing his homework, being by himself.” Planning to follow his mother’s path, Thompson took the police entrance exam when he was 18. He scored 97 percent, in the top tier of thousands of applicants, but, since he wouldn’t be eligible to join the force until he turned 20, he began looking for other ways to pursue law enforcement. In 1985, he enrolled at John Jay College of Criminal Justice, a part of the City University of New York, and after graduating magna cum laude, he entered NYU School of Law in 1989. During his third year of law school, he found the path he was seeking. An active member of the Black Allied Law Students Association, Thompson recalls that the arrival of Ronald Noble created a stir, particularly among the law students of color. Noble, who would go on to serve three terms as secretary general of Interpol— the first American to hold that position— was then a high-profile federal prosecutor who had been the president of his class at Stanford Law. Thompson signed up for Noble’s Evidence class, where he says he was “mesmerized” as Noble peppered his lectures with examples from his days as an assistant US attorney in Philadelphia. “He was so impressive and his work was so amazing; I knew from that point that I wanted to be a prosecutor,” Thompson says. “I wanted to be like him.” In turn, Thompson made an impression on his professor, who recalls a focused and mature young man whose formal demeanor set him apart. Noble once asked Thompson whether he had a job to go to after class, because he was the only student who came to his class in a dress shirt, dress slacks, and a jacket. Thompson’s earnest answer was that he dressed to convey how seriously he took the job of being a law student. The two got to know each other better when Thompson was selected to be one of two students on the admissions committee, on which Noble also served. It was during this time, Thompson recalls, that he told Noble of his intention to become a prosecutor and asked for advice about courses, internships, and jobs. Through Noble, Thompson landed his first full-time job focused on criminal justice. Notably, it involved investigating a law enforcement operation that had gone awry. In 1993, the Clinton administration tapped Noble to review the siege of and assault on the Branch Davidian compound by federal agents in Waco,

Texas, earlier that year. The operation had ended disastrously with the deaths of scores of people, including several federal agents. Noble—then assistant secretary of the US Treasury with oversight of agencies including the Bureau of Alcohol, Tobacco, and Firearms—reached out to his young protégé, and Thompson obtained permission for an early conclusion of his clerkship with Federal District Judge Benjamin Gibson in Michigan to join the investigative team in Washington as Noble’s special assistant. “Ken was the youngest guy on the team and the least experienced, but he established himself by being the hardest worker, with no task too small or beneath him,” says Noble. Thompson became the go-to fact expert. “You could ask him anything about agent X or Y, what he did, or document X or Y, and he would know it,” Noble recalls. The investigative report, delivered in 1993, was sharply critical of many aspects of the Waco operation. Thompson then spent five years as an assistant US attorney in Brooklyn, working on an array of investigations and prosecutions of bank robbery, murder-for-hire, bribery, embezzlement, kidnapping, and other offenses, in addition to the Louima case. That was followed by 14 years in private practice, most of it at a firm that he and Douglas Wigdor formed to represent individuals in discrimination and civil rights cases. Here, too, Thompson handled cases that drew a media spotlight. One of their firm’s first cases was a 2003 lawsuit against Macy’s, alleging that those operating its private policing system engaged in racial profiling of suspected shoplifters. The suit claimed that Macy’s security personnel singled out Sharon Simmons-Thomas because she was black and detained her in a holding cell, where she was handcuffed and pressured to make a false confession, even though she had receipts for the items she bought. While the case settled for an undisclosed amount, it led to an investigation by Eliot Spitzer, then New York’s attorney general. Macy’s settled a complaint filed by the state for $600,000 and agreed to reform its in-store security practices. No case drew Thompson more attention—and criticism—than his 2011 representation of hotel maid Nafissatou Diallo in her civil suit growing out of accusations of sexual assault by the then-head of the International Monetary Fund, Dominique Strauss-Kahn. Thompson stoked media interest in the case in ways that, critics said, ultimately undermined the Manhattan DA’s efforts to hold Strauss-Kahn accountable. Diallo settled her suit, and Thompson makes no apologies for how he handled the case, although he acknowledges that he might have done some things differently. “I had a woman who was in desperate need of a lawyer to protect her interests and who was going against one of the most powerful men in the world at the time,” he says. “She needed justice, and I fought to get her justice.” Thompson had first introduced Diallo to the media at a highly orchestrated press conference at the Christian Cultural Center, a Brooklyn megachurch where Thompson has worshiped for the past two decades. Accompanying him were local politicians as well as the church’s pastor, Reverend A.R. Bernard, something

“If you want to

trace what motivated me to go into law