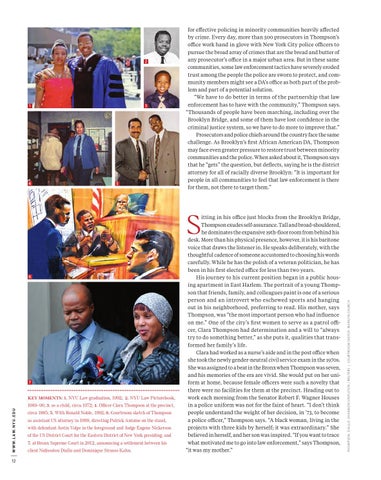 for effective policing in minority communities heavily affected by crime. Every day, more than 500 prosecutors in Thompson’s office work hand in glove with New York City police officers to pursue the broad array of crimes that are the bread and butter of any prosecutor’s office in a major urban area. But in these same communities, some law enforcement tactics have severely eroded trust among the people the police are sworn to protect, and community members might see a DA’s office as both part of the problem and part of a potential solution. “We have to do better in terms of the partnership that law enforcement has to have with the community,” Thompson says. “Thousands of people have been marching, including over the Brooklyn Bridge, and some of them have lost confidence in the criminal justice system, so we have to do more to improve that.” Prosecutors and police chiefs around the country face the same challenge. As Brooklyn’s first African American DA, Thompson may face even greater pressure to restore trust between minority communities and the police. When asked about it, Thompson says that he “gets” the question, but deflects, saying he is the district attorney for all of racially diverse Brooklyn: “It is important for people in all communities to feel that law enforcement is there for them, not there to target them.”

circa 1985; 5. With Ronald Noble, 1992; 6. Courtroom sketch of Thompson as assistant US attorney in 1999, directing Patrick Antoine on the stand, with defendant Justin Volpe in the foreground and Judge Eugene Nickerson of the US District Court for the Eastern District of New York presiding; and 7. at Bronx Supreme Court in 2012, announcing a settlement between his client Nafissatou Diallo and Dominique Strauss-Kahn.

itting in his office just blocks from the Brooklyn Bridge, Thompson exudes self-assurance. Tall and broad-shouldered, he dominates the expansive 19th-floor room from behind his desk. More than his physical presence, however, it is his baritone voice that draws the listener in. He speaks deliberately, with the thoughtful cadence of someone accustomed to choosing his words carefully. While he has the polish of a veteran politician, he has been in his first elected office for less than two years. His journey to his current position began in a public housing apartment in East Harlem. The portrait of a young Thompson that friends, family, and colleagues paint is one of a serious person and an introvert who eschewed sports and hanging out in his neighborhood, preferring to read. His mother, says Thompson, was “the most important person who had influence on me.” One of the city’s first women to serve as a patrol officer, Clara Thompson had determination and a will to “always try to do something better,” as she puts it, qualities that transformed her family’s life. Clara had worked as a nurse’s aide and in the post office when she took the newly gender-neutral civil service exam in the 1970s. She was assigned to a beat in the Bronx when Thompson was seven, and his memories of the era are vivid. She would put on her uniform at home, because female officers were such a novelty that there were no facilities for them at the precinct. Heading out to work each morning from the Senator Robert F. Wagner Houses in a police uniform was not for the faint of heart. “I don’t think people understand the weight of her decision, in ’73, to become a police officer,” Thompson says. “A black woman, living in the projects with three kids by herself; it was extraordinary.” She believed in herself, and her son was inspired. “If you want to trace what motivated me to go into law enforcement,” says Thompson, “it was my mother.”