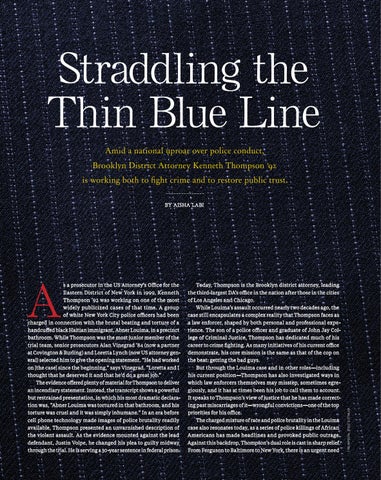 Straddling the Thin Blue Line Amid a national uproar over police conduct, Brooklyn District Attorney Kenneth Thompson ’92 is working both to �ght crime and to restore public trust.

s a prosecutor in the US Attorney’s Office for the Eastern District of New York in 1999, Kenneth Thompson ’92 was working on one of the most widely publicized cases of that time. A group of white New York City police officers had been charged in connection with the brutal beating and torture of a handcuffed black Haitian immigrant, Abner Louima, in a precinct bathroom. While Thompson was the most junior member of the trial team, senior prosecutors Alan Vinegrad ’84 (now a partner at Covington & Burling) and Loretta Lynch (now US attorney general) selected him to give the opening statement. “He had worked on [the case] since the beginning,” says Vinegrad. “Loretta and I thought that he deserved it and that he’d do a great job.” The evidence offered plenty of material for Thompson to deliver an incendiary statement. Instead, the transcript shows a powerful but restrained presentation, in which his most dramatic declaration was, “Abner Louima was tortured in that bathroom, and his torture was cruel and it was simply inhumane.” In an era before cell phone technology made images of police brutality readily available, Thompson presented an unvarnished description of the violent assault. As the evidence mounted against the lead defendant, Justin Volpe, he changed his plea to guilty midway through the trial. He is serving a 30-year sentence in federal prison.

Today, Thompson is the Brooklyn district attorney, leading the third-largest DA’s office in the nation after those in the cities of Los Angeles and Chicago. While Louima’s assault occurred nearly two decades ago, the case still encapsulates a complex reality that Thompson faces as a law enforcer, shaped by both personal and professional experience. The son of a police officer and graduate of John Jay College of Criminal Justice, Thompson has dedicated much of his career to crime fighting. As many initiatives of his current office demonstrate, his core mission is the same as that of the cop on the beat: getting the bad guys. But through the Louima case and in other roles—including his current position—Thompson has also investigated ways in which law enforcers themselves may misstep, sometimes egregiously, and it has at times been his job to call them to account. It speaks to Thompson’s view of justice that he has made correcting past miscarriages of it—wrongful convictions—one of the top priorities for his office. The charged mixture of race and police brutality in the Louima case also resonates today, as a series of police killings of African Americans has made headlines and provoked public outrage. Against this backdrop, Thompson’s dual role is cast in sharp relief. From Ferguson to Baltimore to New York, there is an urgent need