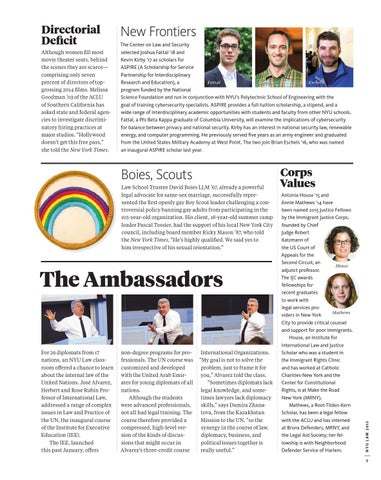 Although women fill most movie theater seats, behind the scenes they are scarce— comprising only seven percent of directors of topgrossing 2014 films. Melissa Goodman ’03 of the ACLU of Southern California has asked state and federal agencies to investigate discriminatory hiring practices at major studios. “Hollywood doesn’t get this free pass,” she told the New York Times.

New Frontiers The Center on Law and Security selected Joshua Fattal ’18 and Kevin Kirby ’17 as scholars for ASPIRE (A Scholarship for Service Partnership for Interdisciplinary Research and Education), a Fattal Kirby Eschels program funded by the National Science Foundation and run in conjunction with NYU’s Polytechnic School of Engineering with the goal of training cybersecurity specialists. ASPIRE provides a full-tuition scholarship, a stipend, and a wide range of interdisciplinary academic opportunities with students and faculty from other NYU schools. Fattal, a Phi Beta Kappa graduate of Columbia University, will examine the implications of cybersecurity for balance between privacy and national security. Kirby has an interest in national security law, renewable energy, and computer programming. He previously served five years as an army engineer and graduated from the United States Military Academy at West Point. The two join Brian Eschels ’16, who was named an inaugural ASPIRE scholar last year.

For 29 diplomats from 17 nations, an NYU Law classroom offered a chance to learn about the internal law of the United Nations. José Alvarez, Herbert and Rose Rubin Professor of International Law, addressed a range of complex issues in Law and Practice of the UN, the inaugural course of the Institute for Executive Education (IEE). The IEE, launched this past January, offers

non-degree programs for professionals. The UN course was customized and developed with the United Arab Emirates for young diplomats of all nations. Although the students were advanced professionals, not all had legal training. The course therefore provided a compressed, high-level version of the kinds of discussions that might occur in Alvarez’s three-credit course

International Organizations. “My goal is not to solve the problem, just to frame it for you,” Alvarez told the class. “Sometimes diplomats lack legal knowledge, and sometimes lawyers lack diplomacy skills,” says Damira Zhanatova, from the Kazakhstan Mission to the UN, “so the synergy in the course of law, diplomacy, business, and political issues together is really useful.”

Corps Values Antonia House ’15 and Annie Mathews ’14 have been named 2015 Justice Fellows by the Immigrant Justice Corps, founded by Chief Judge Robert Katzmann of the US Court of Appeals for the Second Circuit, an House adjunct professor. The IJC awards fellowships for recent graduates to work with legal services proMathews viders in New York City to provide critical counsel and support for poor immigrants. House, an Institute for International Law and Justice Scholar who was a student in the Immigrant Rights Clinic and has worked at Catholic Charities-New York and the Center for Constitutional Rights, is at Make the Road New York (MRNY). Mathews, a Root-Tilden-Kern Scholar, has been a legal fellow with the ACLU and has interned at Bronx Defenders, MRNY, and the Legal Aid Society; her fellowship is with Neighborhood Defender Service of Harlem.