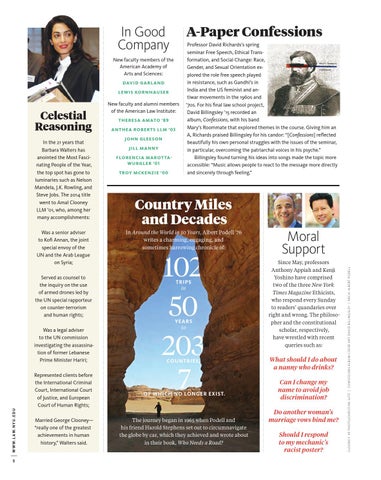 Professor David Richards’s spring seminar Free Speech, Ethical Transformation, and Social Change: Race, Gender, and Sexual Orientation explored the role free speech played in resistance, such as Gandhi’s in India and the US feminist and antiwar movements in the 1960s and ’70s. For his final law school project, David Billingsley ’15 recorded an album, Confessions, with his band Mary’s Roommate that explored themes in the course. Giving him an A, Richards praised Billingsley for his candor: “[Confessions] reflected beautifully his own personal struggles with the issues of the seminar, in particular, overcoming the patriarchal voices in his psyche.” Billingsley found turning his ideas into songs made the topic more accessible: “Music allows people to react to the message more directly and sincerely through feeling.”

In the 21 years that Barbara Walters has anointed the Most Fascinating People of the Year, the top spot has gone to luminaries such as Nelson Mandela, J.K. Rowling, and Steve Jobs. The 2014 title went to Amal Clooney LLM ’01, who, among her many accomplishments: Was a senior adviser to Kofi Annan, the joint special envoy of the UN and the Arab League on Syria; Served as counsel to the inquiry on the use of armed drones led by the UN special rapporteur on counter-terrorism and human rights;

Country Miles and Decades In Around the World in 50 Years, Albert Podell ’76 writes a charming, engaging, and sometimes harrowing chronicle of:

Was a legal adviser to the UN commission investigating the assassination of former Lebanese Prime Minister Hariri;

OF WHICH NO LONGER EXIST.

The journey began in 1965 when Podell and his friend Harold Stephens set out to circumnavigate the globe by car, which they achieved and wrote about in their book, Who Needs a Road?

Moral Support Since May, professors Anthony Appiah and Kenji Yoshino have comprised two of the three New York Times Magazine Ethicists, who respond every Sunday to readers’ quandaries over right and wrong. The philosopher and the constitutional scholar, respectively, have wrestled with recent queries such as:

What should I do about a nanny who drinks? Can I change my name to avoid job discrimination? Do another woman’s marriage vows bind me? Should I respond to my mechanic’s racist poster?

New faculty and alumni members of the American Law Institute: