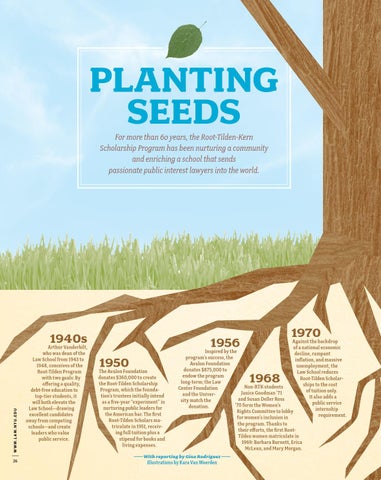 Planting seeds For more than 60 years, the Root-Tilden-Kern Scholarship Program has been nurturing a community and enriching a school that sends passionate public interest lawyers into the world.

who was dean of the Law School from 1943 to 1948, conceives of the Root-Tilden Program with two goals: By offering a quality, debt-free education to top-tier students, it will both elevate the Law School—drawing excellent candidates away from competing schools—and create leaders who value public service.

The Avalon Foundation donates $360,000 to create the Root-Tilden Scholarship Program, which the foundation’s trustees initially intend as a five-year “experiment” in nurturing public leaders for the American bar. The first Root-Tilden Scholars matriculate in 1951, receiving full tuition plus a stipend for books and living expenses.

of a national economic Inspired by the decline, rampant program’s success, the inflation, and massive Avalon Foundation unemployment, the donates $875,000 to Law School reduces endow the program Root-Tilden Scholarlong-term; the Law ships to the cost Non-RTK students Center Foundation of tuition only. Janice Goodman ’71 and the UniverIt also adds a and Susan Deller Ross sity match the public service ’70 form the Women’s donation. internship Rights Committee to lobby requirement. for women’s inclusion in the program. Thanks to their efforts, the first RootTilden women matriculate in 1969: Barbara Burnett, Erica McLean, and Mary Morgan.

— With reporting by Gina Rodriguez — Illustrations by Kara Van Woerden