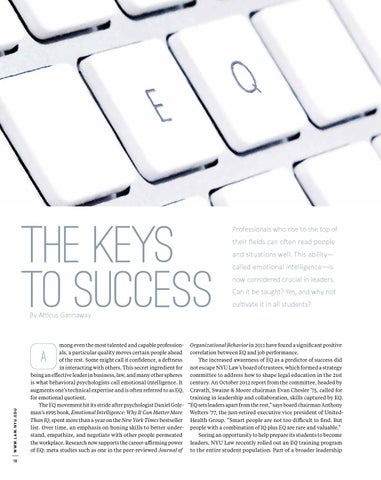 Professionals who rise to the top of their fields can often read people and situations well. This ability— called emotional intelligence—is now considered crucial in leaders. Can it be taught? Yes, and why not cultivate it in all students?

mong even the most talented and capable profession- Organizational Behavior in 2011 have found a significant positive als, a particular quality moves certain people ahead correlation between EQ and job performance. of the rest. Some might call it confidence, a deftness The increased awareness of EQ as a predictor of success did not escape NYU Law’s board of trustees, which formed a strategy in interacting with others. This secret ingredient for being an effective leader in business, law, and many other spheres committee to address how to shape legal education in the 21st is what behavioral psychologists call emotional intelligence. It century. An October 2012 report from the committee, headed by augments one’s technical expertise and is often referred to as EQ, Cravath, Swaine &amp; Moore chairman Evan Chesler ’75, called for training in leadership and collaboration, skills captured by EQ. for emotional quotient. The EQ movement hit its stride after psychologist Daniel Gole- “EQ sets leaders apart from the rest,” says board chairman Anthony man’s 1995 book, Emotional Intelligence: Why It Can Matter More Welters ’77, the just-retired executive vice president of UnitedThan IQ, spent more than a year on the New York Times bestseller Health Group. “Smart people are not too difficult to find. But list. Over time, an emphasis on honing skills to better under- people with a combination of IQ plus EQ are rare and valuable.” stand, empathize, and negotiate with other people permeated Seeing an opportunity to help prepare its students to become the workplace. Research now supports the career-affirming power leaders, NYU Law recently rolled out an EQ training program of EQ: meta studies such as one in the peer-reviewed Journal of to the entire student population. Part of a broader leadership