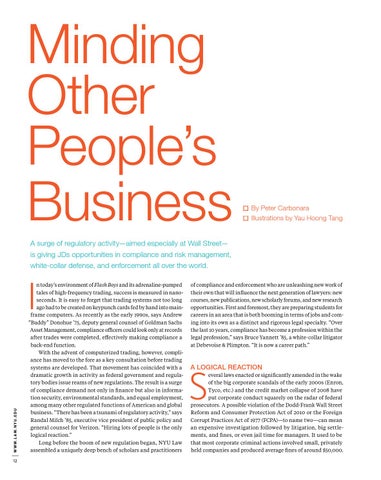 A surge of regulatory activity—aimed especially at Wall Street— is giving JDs opportunities in compliance and risk management, white-collar defense, and enforcement all over the world.

n today’s environment of Flash Boys and its adrenaline-pumped tales of high-frequency trading, success is measured in nanoseconds. It is easy to forget that trading systems not too long ago had to be created on keypunch cards fed by hand into mainframe computers. As recently as the early 1990s, says Andrew “Buddy” Donohue ’75, deputy general counsel of Goldman Sachs Asset Management, compliance officers could look only at records after trades were completed, effectively making compliance a back-end function. With the advent of computerized trading, however, compliance has moved to the fore as a key consultation before trading systems are developed. That movement has coincided with a dramatic growth in activity as federal government and regulatory bodies issue reams of new regulations. The result is a surge of compliance demand not only in finance but also in information security, environmental standards, and equal employment, among many other regulated functions of American and global business. “There has been a tsunami of regulatory activity,” says Randal Milch ’85, executive vice president of public policy and general counsel for Verizon. “Hiring lots of people is the only logical reaction.” Long before the boom of new regulation began, NYU Law assembled a uniquely deep bench of scholars and practitioners

of compliance and enforcement who are unleashing new work of their own that will influence the next generation of lawyers: new courses, new publications, new scholarly forums, and new research opportunities. First and foremost, they are preparing students for careers in an area that is both booming in terms of jobs and coming into its own as a distinct and rigorous legal specialty. “Over the last 10 years, compliance has become a profession within the legal profession,” says Bruce Yannett ’85, a white-collar litigator at Debevoise &amp; Plimpton. “It is now a career path.”

everal laws enacted or significantly amended in the wake of the big corporate scandals of the early 2000s (Enron, Tyco, etc.) and the credit market collapse of 2008 have put corporate conduct squarely on the radar of federal prosecutors. A possible violation of the Dodd-Frank Wall Street Reform and Consumer Protection Act of 2010 or the Foreign Corrupt Practices Act of 1977 (FCPA)—to name two—can mean an expensive investigation followed by litigation, big settlements, and fines, or even jail time for managers. It used to be that most corporate criminal actions involved small, privately held companies and produced average fines of around $50,000.