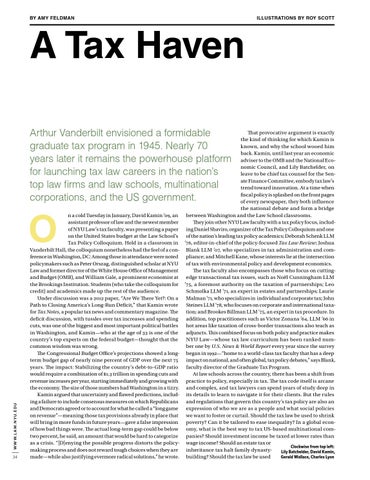 A Tax Haven Arthur Vanderbilt envisioned a formidable graduate tax program in 1945. Nearly 70 years later it remains the powerhouse platform for launching tax law careers in the nation’s top law firms and law schools, multinational corporations, and the US government.

n a cold Tuesday in January, David Kamin ’09, an assistant professor of law and the newest member of NYU Law’s tax faculty, was presenting a paper on the United States budget at the Law School’s Tax Policy Colloquium. Held in a classroom in Vanderbilt Hall, the colloquium nonetheless had the feel of a conference in Washington, DC: Among those in attendance were noted policymakers such as Peter Orszag, distinguished scholar at NYU Law and former director of the White House Office of Management and Budget (OMB), and William Gale, a prominent economist at the Brookings Institution. Students (who take the colloquium for credit) and academics made up the rest of the audience. Under discussion was a 2012 paper, “Are We There Yet?: On a Path to Closing America’s Long-Run Deficit,” that Kamin wrote for Tax Notes, a popular tax news and commentary magazine. The deficit discussion, with tussles over tax increases and spending cuts, was one of the biggest and most important political battles in Washington, and Kamin—who at the age of 33 is one of the country’s top experts on the federal budget—thought that the common wisdom was wrong. The Congressional Budget Office’s projections showed a longterm budget gap of nearly nine percent of GDP over the next 75 years. The impact: Stabilizing the country’s debt-to-GDP ratio would require a combination of $1.3 trillion in spending cuts and revenue increases per year, starting immediately and growing with the economy. The size of those numbers had Washington in a tizzy. Kamin argued that uncertainty and flawed predictions, including a failure to include consensus measures on which Republicans and Democrats agreed or to account for what he called a “long game on revenue”—meaning those tax provisions already in place that will bring in more funds in future years—gave a false impression of how bad things were. The actual long-term gap could be below two percent, he said, an amount that would be hard to categorize as a crisis. “[D]enying the possible progress distorts the policymaking process and does not reward tough choices when they are made—while also justifying evermore radical solutions,” he wrote.

That provocative argument is exactly the kind of thinking for which Kamin is known, and why the school wooed him back. Kamin, until last year an economic adviser to the OMB and the National Economic Council, and Lily Batchelder, on leave to be chief tax counsel for the Senate Finance Committee, embody tax law’s trend toward innovation. At a time when fiscal policy is splashed on the front pages of every newspaper, they both influence the national debate and form a bridge between Washington and the Law School classrooms. They join other NYU Law faculty with a tax policy focus, including Daniel Shaviro, organizer of the Tax Policy Colloquium and one of the nation’s leading tax policy academics; Deborah Schenk LLM ’76, editor-in-chief of the policy-focused Tax Law Review; Joshua Blank LLM ’07, who specializes in tax administration and compliance; and Mitchell Kane, whose interests lie at the intersection of tax with environmental policy and development economics. The tax faculty also encompasses those who focus on cuttingedge transactional tax issues, such as Noël Cunningham LLM ’75, a foremost authority on the taxation of partnerships; Leo Schmolka LLM ’71, an expert in estates and partnerships; Laurie Malman ’71, who specializes in individual and corporate tax; John Steines LLM ’78, who focuses on corporate and international taxation; and Brookes Billman LLM ’75, an expert in tax procedure. In addition, top practitioners such as Victor Zonana ’64, LLM ’66 in hot areas like taxation of cross-border transactions also teach as adjuncts. This combined focus on both policy and practice makes NYU Law—whose tax law curriculum has been ranked number one by U.S. News & World Report every year since the survey began in 1992—“home to a world-class tax faculty that has a deep impact on national, and often global, tax policy debates,” says Blank, faculty director of the Graduate Tax Program. At law schools across the country, there has been a shift from practice to policy, especially in tax. The tax code itself is arcane and complex, and tax lawyers can spend years of study deep in its details to learn to navigate it for their clients. But the rules and regulations that govern this country’s tax policy are also an expression of who we are as a people and what social policies we want to foster or curtail. Should the tax law be used to shrink poverty? Can it be tailored to ease inequality? In a global economy, what is the best way to tax US-based multinational companies? Should investment income be taxed at lower rates than wage income? Should an estate tax or Clockwise from top left: inheritance tax halt family dynastyLily Batchelder, David Kamin, building? Should the tax law be used Gerald Wallace, Charles Lyon