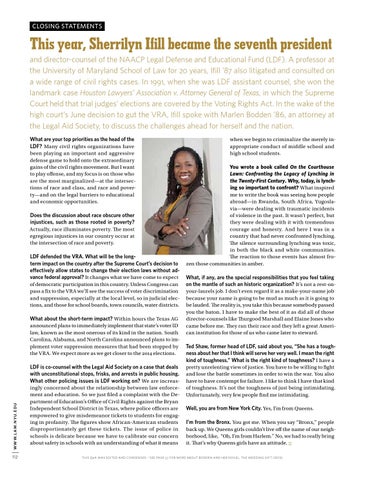 This year, Sherrilyn Ifill became the seventh president and director-counsel of the NAACP Legal Defense and Educational Fund (LDF). A professor at the University of Maryland School of Law for 20 years, Ifill ’87 also litigated and consulted on a wide range of civil rights cases. In 1991, when she was LDF assistant counsel, she won the landmark case Houston Lawyers’ Association v. Attorney General of Texas, in which the Supreme Court held that trial judges’ elections are covered by the Voting Rights Act. In the wake of the high court’s June decision to gut the VRA, Ifill spoke with Marlen Bodden ’86, an attorney at the Legal Aid Society, to discuss the challenges ahead for herself and the nation. What are your top priorities as the head of the LDF? Many civil rights organizations have been playing an important and aggressive defense game to hold onto the extraordinary gains of the civil rights movement. But I want to play offense, and my focus is on those who are the most marginalized—at the intersections of race and class, and race and poverty—and on the legal barriers to educational and economic opportunities. Does the discussion about race obscure other injustices, such as those rooted in poverty? Actually, race illuminates poverty. The most egregious injustices in our country occur at the intersection of race and poverty. LDF defended the VRA. What will be the longterm impact on the country after the Supreme Court’s decision to effectively allow states to change their election laws without advance federal approval? It changes what we have come to expect of democratic participation in this country. Unless Congress can pass a fix to the VRA we’ll see the success of voter discrimination and suppression, especially at the local level, so in judicial elections, and those for school boards, town councils, water districts.

What about the short-term impact? Within hours the Texas AG announced plans to immediately implement that state’s voter ID law, known as the most onerous of its kind in the nation. South Carolina, Alabama, and North Carolina announced plans to implement voter suppression measures that had been stopped by the VRA. We expect more as we get closer to the 2014 elections.

LDF is co-counsel with the Legal Aid Society on a case that deals with unconstitutional stops, frisks, and arrests in public housing. What other policing issues is LDF working on? We are increasingly concerned about the relationship between law enforcement and education. So we just filed a complaint with the Department of Education’s Office of Civil Rights against the Bryan Independent School District in Texas, where police officers are empowered to give misdemeanor tickets to students for engaging in profanity. The figures show African-American students disproportionately get these tickets. The issue of police in schools is delicate because we have to calibrate our concern about safety in schools with an understanding of what it means

when we begin to criminalize the merely inappropriate conduct of middle school and high school students. You wrote a book called On the Courthouse Lawn: Confronting the Legacy of Lynching in the Twenty-First Century. Why, today, is lynching so important to confront? What inspired me to write the book was seeing how people abroad—in Rwanda, South Africa, Yugoslavia—were dealing with traumatic incidents of violence in the past. It wasn’t perfect, but they were dealing with it with tremendous courage and honesty. And here I was in a country that had never confronted lynching. The silence surrounding lynching was toxic, in both the black and white communities. The reaction to those events has almost frozen those communities in amber. What, if any, are the special responsibilities that you feel taking on the mantle of such an historic organization? It’s not a rest-onyour-laurels job. I don’t even regard it as a make-your-name job because your name is going to be mud as much as it is going to be lauded. The reality is, you take this because somebody passed you the baton. I have to make the best of it as did all of those director-counsels like Thurgood Marshall and Elaine Jones who came before me. They ran their race and they left a great American institution for those of us who came later to steward. Ted Shaw, former head of LDF, said about you, “She has a toughness about her that I think will serve her very well. I mean the right kind of toughness.” What is the right kind of toughness? I have a pretty unrelenting view of justice. You have to be willing to fight and lose the battle sometimes in order to win the war. You also have to have contempt for failure. I like to think I have that kind of toughness. It’s not the toughness of just being intimidating. Unfortunately, very few people find me intimidating. Well, you are from New York City. Yes, I’m from Queens. I’m from the Bronx. You got me. When you say “Bronx,” people back up. We Queens girls couldn’t live off the name of our neighborhood, like, “Oh, I’m from Harlem.” No, we had to really bring it. That’s why Queens girls have an attitude.