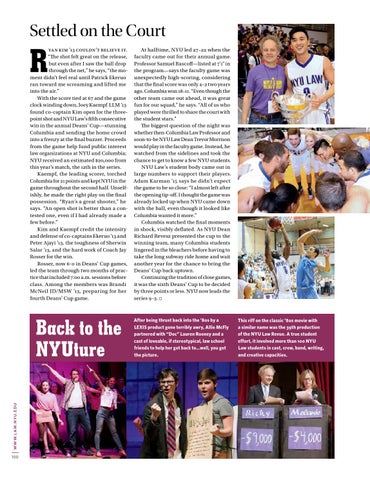 Settled on the Court yan kim ’13 couldn’t believe it. “The shot felt great on the release, but even after I saw the ball drop through the net,” he says, “the moment didn’t feel real until Patrick Ekeruo ran toward me screaming and lifted me into the air.” With the score tied at 67 and the game clock winding down, Joey Kaempf LLM ’13 found co-captain Kim open for the threepoint shot and NYU Law’s fifth consecutive win in the annual Deans’ Cup—stunning Columbia and sending the home crowd into a frenzy at the final buzzer. Proceeds from the game help fund public interest law organizations at NYU and Columbia; NYU received an estimated $20,000 from this year’s match, the 12th in the series. Kaempf, the leading scorer, torched Columbia for 21 points and kept NYU in the game throughout the second half. Unselfishly, he made the right play on the final possession. “Ryan’s a great shooter,” he says. “An open shot is better than a contested one, even if I had already made a few before.” Kim and Kaempf credit the intensity and defense of co-captains Ekeruo ’13 and Peter Ajayi ’13, the toughness of Sherwin Salar ’13, and the hard work of Coach Jay Rosser for the win. Rosser, now 6-0 in Deans’ Cup games, led the team through two months of practice that included 7:00 a.m. sessions before class. Among the members was Brandi McNeil JD/MSW ’13, preparing for her fourth Deans’ Cup game.

At halftime, NYU led 27–22 when the faculty came out for their annual game. Professor Samuel Rascoff—listed at 7'1" in the program—says the faculty game was unexpectedly high-scoring, considering that the final score was only 4–2 two years ago. Columbia won 18–11. “Even though the other team came out ahead, it was great fun for our squad,” he says. “All of us who played were thrilled to share the court with the student stars.” The biggest question of the night was whether then-Columbia Law Professor and soon-to-be NYU Law Dean Trevor Morrison would play in the faculty game. Instead, he watched from the sidelines and took the chance to get to know a few NYU students. NYU Law’s student body came out in large numbers to support their players. Adam Karman ’15 says he didn’t expect the game to be so close: “I almost left after the opening tip-off. I thought the game was already locked up when NYU came down with the ball, even though it looked like Columbia wanted it more.” Columbia watched the final moments in shock, visibly deflated. As NYU Dean Richard Revesz presented the cup to the winning team, many Columbia students lingered in the bleachers before having to take the long subway ride home and wait another year for the chance to bring the Deans’ Cup back uptown. Continuing the tradition of close games, it was the sixth Deans’ Cup to be decided by three points or less. NYU now leads the series 9–3.

After being thrust back into the ’80s by a LEXIS product gone terribly awry, Allie McFly partnered with “Doc” Lauren Rooney and a cast of loveable, if stereotypical, law school friends to help her get back to…well, you get the picture.

This riff on the classic ’80s movie with a similar name was the 39th production of the NYU Law Revue. A true student effort, it involved more than 100 NYU Law students in cast, crew, band, writing, and creative capacities.