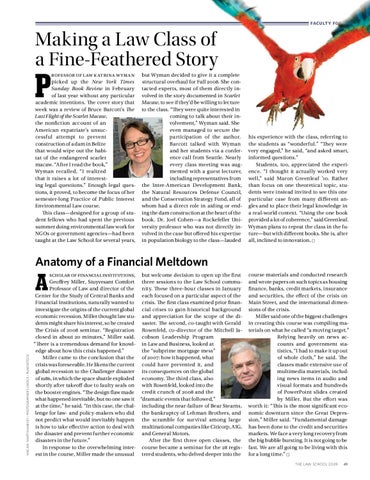 Making a Law Class of a Fine-Feathered Story rofessor of law katrina wyman picked up the New York Times Sunday Book Review in February of last year without any particular academic intentions. The cover story that week was a review of Bruce Barcott’s The Last Flight of the Scarlet Macaw, the nonfiction account of an American expatriate’s unsuccessful attempt to prevent construction of a dam in Belize that would wipe out the habitat of the endangered scarlet macaw. “After I read the book,” Wyman recalled, “I realized that it raises a lot of interesting legal questions.” Enough legal questions, it proved, to become the focus of her semester-long Practice of Public Interest Environmental Law course. This class—designed for a group of student fellows who had spent the previous summer doing environmental law work for NGOs or government agencies—had been taught at the Law School for several years,

but Wyman decided to give it a complete structural overhaul for Fall 2008. She contacted experts, most of them directly involved in the story documented in Scarlet Macaw, to see if they’d be willing to lecture to the class. “They were quite interested in coming to talk about their involvement,” Wyman said. She even managed to secure the participation of the author. Barcott talked with Wyman and her students via a conference call from Seattle. Nearly every class meeting was augmented with a guest lecturer, including representatives from the Inter-American Development Bank, the Natural Resources Defense Council, and the Conservation Strategy Fund, all of whom had a direct role in aiding or ending the dam construction at the heart of the book. Dr. Joel Cohen—a Rockefeller University professor who was not directly involved in the case but offered his expertise in population biology to the class—lauded

his experience with the class, referring to the students as “wonderful.” “They were very engaged,” he said, “and asked smart, informed questions.” Students, too, appreciated the experience. “I thought it actually worked very well,” said Maron Greenleaf ’10. Rather than focus on one theoretical topic, students were instead invited to see this one particular case from many different angles and to place their legal knowledge in a real-world context. “Using the one book provided a lot of coherence,” said Greenleaf. Wyman plans to repeat the class in the future—but with different books. She is, after all, inclined to innovation.

Anatomy of a Financial Meltdown scholar of financial institutions, but welcome decision to open up the first Geoffrey Miller, Stuyvesant Comfort three sessions to the Law School commuProfessor of Law and director of the nity. These three-hour classes in January Center for the Study of Central Banks and each focused on a particular aspect of the Financial Institutions, naturally wanted to crisis. The first class examined prior finaninvestigate the origins of the current global cial crises to gain historical background economic recession. Miller thought law stu- and appreciation for the scope of the didents might share his interest, so he created saster. The second, co-taught with Gerald The Crisis of 2008 seminar. “Registration Rosenfeld, co-director of the Mitchell Jaclosed in about 20 minutes,” Miller said. cobson Leadership Program “There is a tremendous demand for knowl- in Law and Business, looked at the “subprime mortgage mess” edge about how this crisis happened.” Miller came to the conclusion that the of 2007: how it happened, what crisis was foreseeable. He likens the current could have prevented it, and global recession to the Challenger disaster its consequences on the global of 1986, in which the space shuttle exploded economy. The third class, also shortly after takeoff due to faulty seals on with Rosenfeld, looked into the the booster engines. “The design flaw made credit crunch of 2008 and the what happened inevitable, but no one saw it “dramatic events that followed,” at the time,” he said. “In this case, the chal- including the near-failure of Bear Stearns, lenge for law- and policy-makers who did the bankruptcy of Lehman Brothers, and not predict what would inevitably happen the scramble for survival among large is how to take effective action to deal with multi­national companies like Citicorp, AIG, the disaster and prevent further economic and General Motors. After the first three open classes, the disasters in the future.” In response to the overwhelming inter- course became a seminar for the 28 regisest in the course, Miller made the unusual tered students, who delved deeper into the

course materials and conducted research and wrote papers on such topics as housing finance, banks, credit markets, insurance and securities, the effect of the crisis on Main Street, and the international dimensions of the crisis. Miller said one of the biggest challenges in creating this course was compiling materials on what he called “a moving target.” Relying heavily on news accounts and government statistics, “I had to make it up out of whole cloth,” he said. The classes made extensive use of multimedia materials, including news items in audio and visual formats and hundreds of PowerPoint slides created by Miller. But the effort was worth it: “This is the most significant economic downturn since the Great Depression,” Miller said. “Fundamental damage has been done to the credit and securities markets. We face a very long recovery from the big bubble bursting. It is not going to be fast. We are all going to be living with this for a long time.” THE LAW SCHOOL 2009

The 2009 issue of the magazine of the New York University School of Law.

The 2009 issue of the magazine of the New York University School of Law.