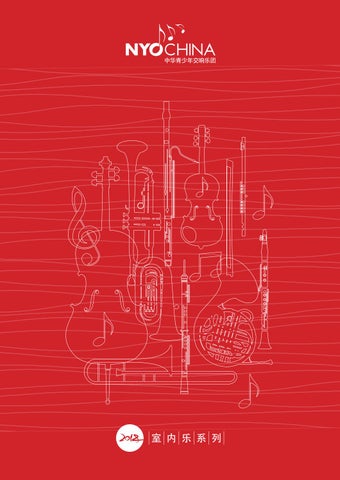 RE-INTRODUCING NYO-CHINA The National Youth Orchestra of China (NYO-China) launched one year ago with the goal of providing exceptional Chinese student musicians access to superior instruction, extraordinary performance opportunities, and a platform upon which they could represent their country and their generation to the world. In 2017, 105 remarkable student musicians, aged 14 to 21 years old and representing all parts of China, were selected from a pool of over 1000 applicants to join the inaugural ensemble. That summer, the young instrumentalists gathered in the United States for a rigorous two-week training residency with internationally renowned orchestral artists before debuting in New York and embarking on a multi-city concert tour of China. Its sold-out premiere at Carnegie Hall with conductor Ludovic Morlot and pianist Yuja Wang was critically acclaimed by The New York Times, which remarked that â&#x20AC;&#x153;if [this performance] was a test run for this new venture, these Chinese musicians scored big.â&#x20AC;? NYO-China returns this summer to present the 2018 Chamber Series, a residency and concert tour centered around the craft and performance of chamber music. For two weeks in July, twenty-one phenomenal young musicians will gather at the Central Conservatory of Music in Beijing to rehearse a selection of great works in the chamber music repertoire under the direction of a small faculty of teaching artists. Students and mentors will then join each other onstage to present their prepared works through a series of performances across China. The NYO-China Chamber Series is meant to provide its members with an especially focused and intimate musical experience. During the residency, students will benefit from both extended private instruction and increased rehearsal time spent in dialogue with their peers and teachers. Thereafter, the concert tour will provide numerous and varied opportunities for meaningful engagement with their listeners. In combination, these commitments will emphasize the necessity of open and honest relationships in music making, as well as the power of the connections that result. WHAT IS NYO? National Youth Orchestras have exited around the world for decades: NYO-Great Britain was founded in 1948, the South African NYO in 1964, and the Singaporean NYO in 1979. Several of these non-governmental orchestras have the same structure as NYO-China - a training residency and concert tour lasting several weeks. Others serve as a stepping stone between studying music and joining a professional orchestra; some even offer courses for musicians all year long. NYO-USA, the inspiration for NYO-China and a cultural pillar designated at the fifth US-China High Level Consultation on People-to-People Exchange (CPE), was created by Carnegie Hall in 2013 and was the first program of its kind in the United States. Like its American predecessor, NYO-China is also equally committed to ensuring that the program remains absolutely free to all students, so that no outstanding musician is ever turned away. 1

Recital & Dialogue at the Yale Center Beijing | July 23 The Yale Center Beijing is a frequent destination of many of the world’s most interesting speakers – leaders and scholars who engage in topics ranging from diplomacy to business to art. The Center also allows Yale University to foster new relationships in China and support scholarship being done within the country. NYO-China is excited to be returning to the Center with an event hosted by NYO-China administrators and Yale alumni Vincent Accettola and Nicholas Brown, during which students will perform for guests in attendance and many more abroad via live stream.

Debut Concert at the CCOM Opera & Concert Hall | July 28 At the conclusion of their residency at the Central Conservatory of Music in Beijing, the NYO-China chamber ensembles will make their debut at the institution’s newest and most impressive concert venues, the recently opened Opera & Concert Hall. Built to facilitate superior acoustics and seat over 700 audience members, this grand theater will allow numerous guests to clearly hear the tremendous skill and talent that NYO-has to offer. In making their debut here, NYO-China’s students will also certainly be among the first of many rising young artists to eventually take the stage at CCOM’s Opera & Concert Hall.

Cultural Exchange with NYO-USA | July 30 Following their joint rehearsal and back-to-back concerts in Carnegie Hall in 2017, NYO-USA and NYO-China reunite to partake in a day of cultural exchange and music-making in Beijing. After an expedition to the Great Wall of China in the morning, both ensembles will gather at the Beijing American Center at the US Embassy in Beijing to perform a selection of chamber works together. Home to dozens of lectures, movies, and presentations on American culture every week, the BAC serves as an important window into the United States for people residing in China, as well as a fitting venue for these musical ambassadors.

Concert at NYU Shanghai | August 2 Opened in September 2013 in Pudong as a jointly established venture between New York University and East China Normal University, NYU Shanghai has quickly identified itself as one of the most exciting ventures in Chinese higher education, offering plentiful esteemed degree programs and concentrations of study. Situated on a campus informed by the brilliant designs of acclaimed architectural firm Kohn Pederson Fox, NYU Shanghai is also home to an especially stunning auditorium where NYO-China’s chamber ensembles will be able to perform for over 300 of their Shanghainese fans.

Chuansha International Piano Festival | August 3 The Chuansha International Piano Festival, created by celebrated Chinese pianist Zhou Keng, is an annual gathering of some of the world’s most talented pianists in the beautiful Chuansha region of Shanghai. There, Robert Blocker (renowned classical pianist and the Henry and Lucy Moses Dean of Music at Yale University) and Yale alumni among the NYO-China management team will have the honor of bringing NYO-China to the birthplace of Huang Zi – the first Chinese graduate of the Yale School of Music – where they will host a celebratory concert the evening before the festival’s formal opening.

Qingdao International Music Festival | August 5 The Qingdao International Music Festival is a major music festival that is eagerly awaited by numerous musicians (both students and professionals) every year. For two weeks in August, the festival is home to dozens of performances, as well as plentiful master classes for aspiring orchestral musicians. To conclude the 2018 Chamber Series, NYO-China will perform at one of the festival’s most spectacular venues – a transparent glass church capable of seating over 150 listeners, and a space that feels both remarkably open and intimate at the same time.

TEACHING ARTISTS QING LI | STRINGS Qing Li is a versatile artist who serves as the Baltimore Symphony’s Principal Second Violin, as well as a faculty member for violin at the Peabody Institute at Johns Hopkins University. At age twelve, Li was accepted to study the Central Conservatory of Music in Beijing. After an award-winning performance of the Sibelius Violin Concerto at the first Beijing International Violin Competition, she was recommended by Berl Senofsky to continue her studies at the Peabody Institute under a full scholarship. Beyond her work at the Baltimore Symphony, Li is a frequent soloist, chamber musician, and guest concertmaster; she also routinely gives master classes throughout Asia and the Americas, visiting premier conservatories and acclaimed music festivals.

YONG MA | WOODWINDS Yong Ma currently serves as the Principal Flute at the China National Opera. Ma began studying flute at eight years old, soon after becoming a student at the Central Conservatory of Music in Beijing under Yongxin Wang. In 1996, Ma traveled to the United States where he later earned his Bachelor’s and Master’s degrees from the Juilliard School in New York; there, he studied with both Carol Wincenc and Robert Langevin. Before his current role at the China National Opera, he served as Principal Flute in the Shenzhen Symphony Orchestra and the Louisville Orchestra. He has also performed with the New York Philharmonic, Baltimore Symphony Orchestra, Malaysian Philharmonic, and Juilliard Orchestra. Since 2013, he has taught as a Professor of Flute at Shanxi North University of China, the China Orchestra Academy at the Central Conservatory of Music, and the Art Institute of Jilin.

Cello Mannes School of Music at The New School

NYO-China with Olga Kern and Ludovic Morlot at the Suzhou Culture and Arts Centre on July 29, 2017 Photo Credit to Steven Li 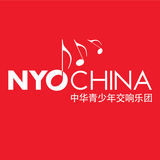