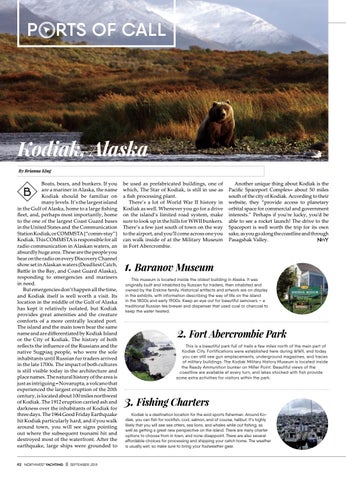 Kodiak, Alaska By Brianna King Boats, bears, and bunkers. If you are a mariner in Alaska, the name Kodiak should be familiar on many levels. It’s the largest island in the Gulf of Alaska, home to a large ﬁshing ﬂeet, and, perhaps most importantly, home to the one of the largest Coast Guard bases in the United States and the Communication Station Kodiak, or COMMSTA [“comm-stay”] Kodiak. This COMMSTA is responsible for all radio communication in Alaskan waters, an absurdly huge area. These are the people you hear on the radio on every Discovery Channel show set in Alaskan waters (Deadliest Catch, Battle in the Bay, and Coast Guard Alaska), responding to emergencies and mariners in need. But emergencies don’t happen all the time, and Kodiak itself is well worth a visit. Its location in the middle of the Gulf of Alaska has kept it relatively isolated, but Kodiak provides great amenities and the creature comforts of a more centrally located port. The island and the main town bear the same name and are diﬀerentiated by Kodiak Island or the City of Kodiak. The history of both reﬂects the inﬂuence of the Russians and the native Sugpiaq people, who were the sole inhabitants until Russian fur traders arrived in the late 1700s. The impact of both cultures is still visible today in the architecture and place names. The natural history of the area is just as intriguing – Novarupta, a volcano that experienced the largest eruption of the 20th century, is located about 100 miles northwest of Kodiak. The 1912 eruption carried ash and darkness over the inhabitants of Kodiak for three days. The 1964 Good Friday Earthquake hit Kodiak particularly hard, and if you walk around town, you will see signs pointing out where the subsequent tsunami hit and destroyed most of the waterfront. After the earthquake, large ships were grounded to

be used as prefabricated buildings, one of which, The Star of Kodiak, is still in use as a ﬁsh processing plant. There’s a lot of World War II history in Kodiak as well. Whenever you go for a drive on the island’s limited road system, make sure to look up in the hills for WWII bunkers. There’s a few just south of town on the way to the airport, and you’ll come across one you can walk inside of at the Military Museum in Fort Abercrombie.

Another unique thing about Kodiak is the Paciﬁc Spaceport Complex– about 50 miles south of the city of Kodiak. According to their website, they “provide access to planetary orbital space for commercial and government interests.” Perhaps if you’re lucky, you’d be able to see a rocket launch! The drive to the Spaceport is well worth the trip for its own sake, as you go along the coastline and through Pasagshak Valley.

1. Baranov Museum This museum is located inside the oldest building in Alaska. It was originally built and inhabited by Russian fur traders, then inhabited and owned by the Erskine family. Historical artifacts and artwork are on display in the exhibits, with information describing the way of life on the island in the 1800s and early 1900s. Keep an eye out for beautiful samovars – a traditional Russian tea brewer and dispenser that used coal or charcoal to keep the water heated.

2. Fort Abercrombie Park This is a beautiful park full of trails a few miles north of the main part of Kodiak City. Fortifications were established here during WWII, and today you can still see gun emplacements, underground magazines, and traces of military buildings. The Kodiak Military History Museum is located inside the Ready Ammunition bunker on Miller Point. Beautiful views of the coastline are available at every turn, and lakes stocked with fish provide some extra activities for visitors within the park.

3. Fishing Charters Kodiak is a destination location for the avid sports fisherman. Around Kodiak, you can fish for rockfish, cod, salmon, and of course, halibut. It’s highly likely that you will see sea otters, sea lions, and whales while out fishing, as well as getting a great new perspective on the island. There are many charter options to choose from in town, and none disappoint. There are also several affordable choices for processing and shipping your catch home. The weather is usually wet, so make sure to bring your foulweather gear.