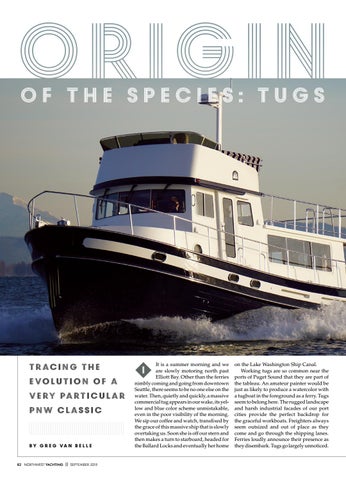 OF THE SPECIES: TUGS

It is a summer morning and we are slowly motoring north past Elliott Bay. Other than the ferries nimbly coming and going from downtown Seattle, there seems to be no one else on the water. Then, quietly and quickly, a massive commercial tug appears in our wake, its yellow and blue color scheme unmistakable, even in the poor visibility of the morning. We sip our coffee and watch, transfixed by the grace of this massive ship that is slowly overtaking us. Soon she is off our stern and then makes a turn to starboard, headed for the Ballard Locks and eventually her home

on the Lake Washington Ship Canal. Working tugs are so common near the ports of Puget Sound that they are part of the tableau. An amateur painter would be just as likely to produce a watercolor with a tugboat in the foreground as a ferry. Tugs seem to belong here. The rugged landscape and harsh industrial facades of our port cities provide the perfect backdrop for the graceful workboats. Freighters always seem outsized and out of place as they come and go through the shipping lanes. Ferries loudly announce their presence as they disembark. Tugs go largely unnoticed.