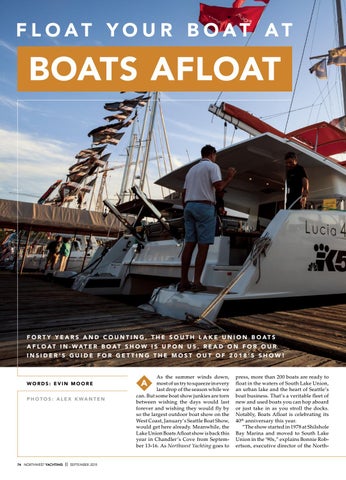 As the summer winds down, most of us try to squeeze in every last drop of the season while we can. But some boat show junkies are torn between wishing the days would last forever and wishing they would fly by so the largest outdoor boat show on the West Coast, January’s Seattle Boat Show, would get here already. Meanwhile, the Lake Union Boats Afloat show is back this year in Chandler ’s Cove from September 13-16. As Northwest Yachting goes to

press, more than 200 boats are ready to float in the waters of South Lake Union, an urban lake and the heart of Seattle’s boat business. That’s a veritable fleet of new and used boats you can hop aboard or just take in as you stroll the docks. Notably, Boats Afloat is celebrating its 40 th anniversary this year. “The show started in 1978 at Shilshole Bay Marina and moved to South Lake Union in the ‘90s,” explains Bonnie Robertson, executive director of the North-