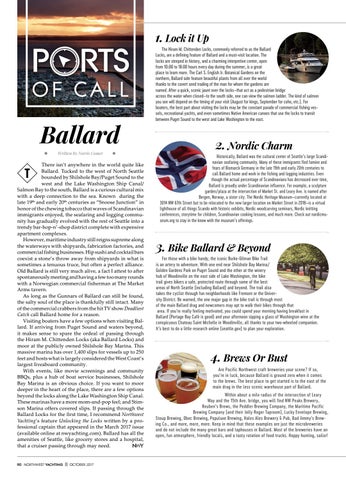 Ballard Written by Norris Comer There isn’t anywhere in the world quite like Ballard. Tucked to the west of North Seattle bounded by Shilshole Bay/Puget Sound to the west and the Lake Washington Ship Canal/ Salmon Bay to the south, Ballard is a curious cultural mix with a deep connection to the sea. Known during the late 19th and early 20th centuries as “Snoose Junction” in honor of the chewing tobacco that waves of Scandinavian immigrants enjoyed, the seafaring and logging community has gradually evolved with the rest of Seattle into a trendy bar-hop-n’-shop district complete with expensive apartment complexes. However, maritime industry still reigns supreme along the waterways with shipyards, fabrication factories, and commercial fishing businesses. Hip sushi and cocktail bars coexist a stone’s throw away from shipyards in what is sometimes a tenuous truce, but often a perfect alliance. Old Ballard is still very much alive, a fact I attest to after spontaneously meeting and having a few too many rounds with a Norwegian commercial fisherman at The Market Arms tavern. As long as the Gunnars of Ballard can still be found, the salty soul of the place is thankfully still intact. Many of the commercial crabbers from the hit TV show Deadliest Catch call Ballard home for a reason. Visiting boaters have a few options when visiting Ballard. If arriving from Puget Sound and waters beyond, it makes sense to spare the ordeal of passing through the Hiram M. Chittenden Locks (aka Ballard Locks) and moor at the publicly owned Shilshole Bay Marina. This massive marina has over 1,400 slips for vessels up to 250 feet and hosts what is largely considered the West Coast’s largest liveaboard community. With events, like movie screenings and community BBQs, plus a hub of boat service businesses, Shilshole Bay Marina is an obvious choice. If you want to moor deeper in the heart of the place, there are a few options beyond the locks along the Lake Washington Ship Canal. These marinas have a more mom-and-pop feel; and Stimson Marina offers covered slips. If passing through the Ballard Locks for the first time, I recommend Northwest Yachting’s feature Unlocking the Locks written by a professional captain that appeared in the March 2017 issue (available online at nwyachting.com). Ballard has all the amenities of Seattle, like grocery stores and a hospital, that a cruiser passing through may need.

1. Lock it Up The Hiram M. Chittenden Locks, commonly referred to as the Ballard Locks, are a defining feature of Ballard and a must-visit location. The locks are steeped in history, and a charming interpretive center, open from 10:00 to 18:00 hours every day during the summer, is a great place to learn more. The Carl S. English Jr. Botanical Gardens on the northern, Ballard side feature beautiful plants from all over the world thanks to the covert seed trading of the man for whom the gardens are named. After a quick, scenic jaunt over the locks–that act as a pedestrian bridge across the water when closed–to the south side, one can view the salmon ladder. The kind of salmon you see will depend on the timing of your visit (August for kings, September for coho, etc.). For boaters, the best part about visiting the locks may be the constant parade of commercial fishing vessels, recreational yachts, and even sometimes Native American canoes that use the locks to transit between Puget Sound to the west and Lake Washington to the east.

2. Nordic Charm Historically, Ballard was the cultural center of Seattle’s large Scandinavian seafaring community. Many of these immigrants fled famine and fears of Bismarck Germany in the late 19th and early 20th centuries to call Ballard home and work in the fishing and logging industries. Even though the actual percentage of Scandinavians has decreased over time, Ballard is proudly under Scandinavian influence. For example, a sculpture garden/plaza at the intersection of Market St. and Leary Ave. is named after Bergen, Norway, a sister city. The Nordic Heritage Museum–currently located at 3014 NW 67th Street but to be relocated to the new larger location on Market Street in 2018–is a virtual lighthouse of all things Scando with historic exhibits, Nordic woodcarving seminars, Nordic knitting conferences, storytime for children, Scandinavian cooking lessons, and much more. Check out nordicmuseum.org to stay in the know with the museum’s offerings.

3. Bike Ballard &amp; Beyond For those with a bike handy, the iconic Burke-Gilman Bike Trail is an artery to adventure. With one end near Shilshole Bay Marina/ Golden Gardens Park on Puget Sound and the other at the winery hub of Woodinville on the east side of Lake Washington, the bike trail gives bikers a safe, protected route through some of the best areas of North Seattle (including Ballard) and beyond. The trail also takes the cyclist through fun neighborhoods like Fremont or the University District. Be warned, the one major gap in the bike trail is through most of the main Ballard drag and newcomers may opt to walk their bikes through that area. If you’re really feeling motivated, you could spend your morning having breakfast in Ballard (Portage Bay Café is good) and your afternoon sipping a glass of Washington wine at the conspicuous Chateau Saint Michelle in Woodinville, all thanks to your two-wheeled companion. It’s best to do a little research online (seattle.gov) to plan your exploration.

4. Brews Or Bust Are Pacific Northwest craft breweries your scene? If so, you’re in luck, because Ballard is ground zero when it comes to the brews. The best place to get started is to the east of the main drag in the less scenic warehouse part of Ballard. Within about a mile radius of the intersection of Leary Way and the 15th Ave. bridge, you will find NW Peaks Brewery, Reuben’s Brews, the Peddler Brewing Company, the Maritime Pacific Brewing Company (and their Jolly Roger Taproom), Lucky Envelope Brewing, Stoup Brewing, Obec Brewing, Populuxe Brewing, Hales Ales Brewery &amp; Pub, Bad Jimmy’s Brewing Co., and more, more, more. Keep in mind that these examples are just the microbreweries and do not include the many great bars and taphouses in Ballard. Most of the breweries have an open, fun atmosphere, friendly locals, and a tasty rotation of food trucks. Hoppy hunting, sailor!

All the latest on Power Boating & Sail in the Northwest, featuring a look an interview with four-time Tasar World Champions Libby and Jonathan McKee, a look at Locally-built Aluminum Boats, the resurrection of a vintage Coast Guard Motor Lifeboat, all about DIY Boatyards, and much more!