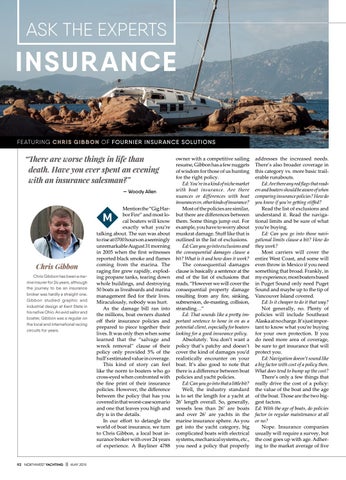 “There are worse things in life than death. Have you ever spent an evening with an insurance salesman?” — Woody Allen Mention the “Gig Harbor Fire” and most local boaters will know exactly what you’re talking about. The sun was about to rise at 0700 hours on a seemingly unremarkable August 31 morning in 2005 when the ﬁrst witnesses reported black smoke and ﬂames coming from the marina. The raging ﬁre grew rapidly, exploding propane tanks, tearing down whole buildings, and destroying 50 boats as liveaboards and marina management ﬂed for their lives. Miraculously, nobody was hurt. As the damage bill ran into the millions, boat owners dusted oﬀ their insurance policies and prepared to piece together their lives. It was only then when some learned that the “salvage and wreck removal” clause of their policy only provided 5% of the hull’s estimated value in coverage. This kind of story can feel like the norm to boaters who go cross-eyed when confronted with the ﬁne print of their insurance policies. However, the diﬀerence between the policy that has you covered in that worst-case scenario and one that leaves you high and dry is in the details. In our eﬀort to detangle the world of boat insurance, we turn to Chris Gibbon, a local boat insurance broker with over 24 years of experience. A Bayliner 4788

Chris Gibbon Chris Gibbon has been a marine insurer for 24 years, although the journey to be an insurance broker was hardly a straight one. Gibbon studied graphic and industrial design at Kent State in his native Ohio. An avid sailor and boater, Gibbon was a regular on the local and international racing circuits for years.

owner with a competitive sailing resume, Gibbon has a few nuggets of wisdom for those of us hunting for the right policy. Ed: You’re in a kind of niche market with boat insurance. Are there nuances or differences with boat insurances vs. other kinds of insurance? Most of the policies are similar, but there are diﬀerences between them. Some things jump out. For example, you have to worry about muskrat damage. Stuﬀ like that is outlined in the list of exclusions. Ed: Can you go into exclusions and the consequential damages clause a bit? What is it and how does it work? The consequential damages clause is basically a sentence at the end of the list of exclusions that reads, “However we will cover the consequential property damage resulting from any ﬁre, sinking, submersion, de-masting, collision, stranding…” Ed: That sounds like a pretty important sentence to hone in on as a potential client, especially for boaters looking for a good insurance policy. Absolutely. You don’t want a policy that’s patchy and doesn’t cover the kind of damages you’d realistically encounter on your boat. It’s also good to note that there is a diﬀerence between boat policies and yacht policies. Ed: Can you go into that a little bit? Well, the industry standard is to set the length for a yacht at 26’ length overall. So, generally, vessels less than 26’ are boats and over 26’ are yachts in the marine insurance sphere. As you get into the yacht category, big complicated boats with electrical systems, mechanical systems, etc., you need a policy that properly

addresses the increased needs. There’s also broader coverage in this category vs. more basic trailerable runabouts. Ed: Are there any red ﬂags that readers and boaters should be aware of when comparing insurance policies? How do you know if you’re getting stiﬀed? Read the list of exclusions and understand it. Read the navigational limits and be sure of what you’re buying. Ed: Can you go into those navigational limits clause a bit? How do they work? Most carriers will cover the entire West Coast, and some will even throw in Mexico if you need something that broad. Frankly, in my experience, most boaters based in Puget Sound only need Puget Sound and maybe up to the tip of Vancouver Island covered. Ed: Is it cheaper to do it that way? Not generally, no. Plenty of policies will include Southeast Alaska at no charge. It’s just important to know what you’re buying for your own protection. If you do need more area of coverage, be sure to get insurance that will protect you. Ed: Navigation doesn’t sound like a big factor with cost of a policy then. What does tend to bump up the cost? There’s only a few things that really drive the cost of a policy: the value of the boat and the age of the boat. Those are the two biggest factors. Ed: With the age of boats, do policies factor in regular maintenance at all or no? Nope. Insurance companies usually will require a survey, but the cost goes up with age. Adhering to the market average of ﬁve

The latest on power and sail boating in the Northwest, featuring our updated British Columbia Parks Guide; a roundup of 2018's summer Rendezvous; a trip to Taiwan to see the birth of a new Yacht; the ins and outs of catching and preparing PNW Crab; A trip to Ladysmith, B.C., all about marine insurance in our Ask the Experts, and much, much, more!