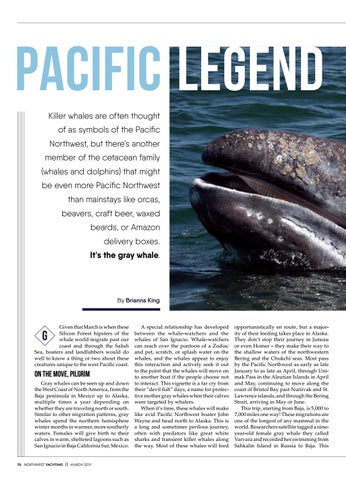 Killer whales are often thought of as symbols of the Pacific Northwest, but there&#39;s another member of the cetacean family (whales and dolphins) that might be even more Pacific Northwest than mainstays like orcas, beavers, craft beer, waxed beards, or Amazon delivery boxes. It&#39;s the gray whale.

Given that March is when these Silicon Forest hipsters of the whale world migrate past our coast and through the Salish Sea, boaters and landlubbers would do well to know a thing or two about these creatures unique to the west Pacific coast.

On the move, Pilgrim Gray whales can be seen up and down the West Coast of North America, from the Baja peninsula in Mexico up to Alaska, multiple times a year depending on whether they are traveling north or south. Similar to other migration patterns, gray whales spend the northern hemisphere winter months in warmer, more southerly waters. Females will give birth to their calves in warm, sheltered lagoons such as San Ignacio in Baja California Sur, Mexico.

A special relationship has developed between the whale-watchers and the whales of San Ignacio. Whale-watchers can reach over the pontoon of a Zodiac and pet, scratch, or splash water on the whales, and the whales appear to enjoy this interaction and actively seek it out to the point that the whales will move on to another boat if the people choose not to interact. This vignette is a far cry from their “devil fish” days, a name for protective mother gray whales when their calves were targeted by whalers. When it’s time, these whales will make like avid Pacific Northwest boater John Wayne and head north to Alaska. This is a long and sometimes perilous journey, often with predators like great white sharks and transient killer whales along the way. Most of these whales will feed

opportunistically en route, but a majority of their feeding takes place in Alaska. They don’t stop their journey in Juneau or even Homer – they make their way to the shallow waters of the northwestern Bering and the Chukchi seas. Most pass by the Pacific Northwest as early as late January to as late as April, through Unimak Pass in the Aleutian Islands in April and May, continuing to move along the coast of Bristol Bay past Nunivak and St. Lawrence islands, and through the Bering Strait, arriving in May or June. This trip, starting from Baja, is 5,000 to 7,000 miles one way! These migrations are one of the longest of any mammal in the world. Researchers satellite tagged a nineyear-old female gray whale they called Varvara and recorded her swimming from Sahkalin Island in Russia to Baja. This

The latest on power and sail boating in the Northwest, featuring part one of our brand-new British Columbia Marina Guide; A look at the fastest foiling boats in sailing today; Tips for seeing and experiencing Gray Whales; A trip to Port Moody, B.C.; the ins and outs of Boat Detailing in our Ask the Experts, and much, much, more!