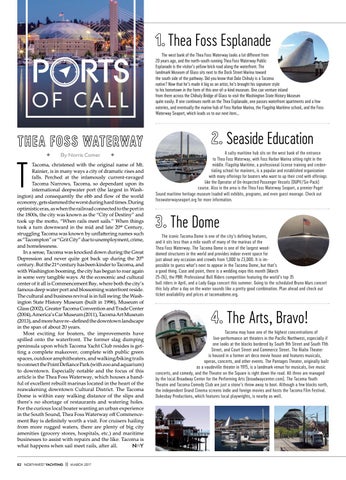 The west bank of the Thea Foss Waterway looks a lot different from 20 years ago, and the north-south running Thea Foss Waterway Public Esplanade is the visitor’s yellow brick road along the waterfront. The landmark Museum of Glass sits next to the Dock Street Marina toward the south side of the pathway. Did you know that Dale Chihuly is a Tacoma native? Now that he’s made it big as an artist, he’s brought his signature style to his hometown in the form of this one-of-a-kind museum. One can venture inland from there across the Chihuly Bridge of Glass to visit the Washington State History Museum quite easily. If one continues north on the Thea Esplanade, one passes waterfront apartments and a few eateries, and eventually the marine hub of Foss Harbor Marina, the Flagship Maritime school, and the Foss Waterway Seaport, which leads us to our next item…

Tacoma, christened with the original name of Mt. Rainier, is in many ways a city of dramatic rises and falls. Perched at the infamously current-ravaged Tacoma Narrows, Tacoma, so dependant upon its international deepwater port (the largest in Washington) and consequently the ebb and ﬂow of the world economy, gets slammed the worst during hard times. During optimistic eras, as when the railroad connected to the port in the 1800s, the city was known as the “City of Destiny” and took up the motto, “When rails meet sails.” When things took a turn downward in the mid and late 20th Century, struggling Tacoma was known by unﬂattering names such as “Tacompton” or “Grit City” due to unemployment, crime, and homelessness. In a sense, Tacoma was knocked down during the Great Depression and never quite got back up during the 20th century. But the 21st century has been kinder to Tacoma, and with Washington booming, the city has begun to roar again in some very tangible ways. At the economic and cultural center of it all is Commencement Bay, where both the city’s famous deep water port and blossoming waterfront reside. The cultural and business revival is in full swing: the Washington State History Museum (built in 1996), Museum of Glass (2002), Greater Tacoma Convention and Trade Center (2004), America’s Car Museum (2011), Tacoma Art Museum (2013), and more have re--defined the downtown landscape in the span of about 20 years. Most exciting for boaters, the improvements have spilled onto the waterfront. The former slag dumping peninsula upon which Tacoma Yacht Club resides is getting a complete makeover, complete with public green spaces, outdoor amphitheaters, and walking/biking trails to connect the Point Defiance Park (with zoo and aquarium) to downtown. Especially notable and the focus of this article is the Thea Foss Waterway, which houses a handful of excellent rebuilt marinas located in the heart of the reawakening downtown Cultural District. The Tacoma Dome is within easy walking distance of the slips and there’s no shortage of restaurants and watering holes. For the curious local boater wanting an urban experience in the South Sound, Thea Foss Waterway oﬀ Commencement Bay is definitely worth a visit. For cruisers hailing from more rugged waters, there are plenty of big city amenities (grocery stores, hospitals, etc.) and maritime businesses to assist with repairs and the like. Tacoma is what happens when sail meet rails, after all.

A salty maritime hub sits on the west bank of the entrance to Thea Foss Waterway, with Foss Harbor Marina sitting right in the middle. Flagship Maritime, a professional license training and credentialing school for mariners, is a popular and established organization with many offerings for boaters who want to up their cred with offerings like the Operator of Un-Inspected Passenger Vessels (OUPV/Six-Pack) course. Also in the area is the Thea Foss Waterway Seaport, a premier Puget Sound maritime heritage museum loaded will exhibits, programs, and even guest moorage. Check out fosswaterwayseaport.org for more information.

The Dome The iconic Tacoma Dome is one of the city’s defining features, and it sits less than a mile south of many of the marinas of the Thea Foss Waterway. The Tacoma Dome is one of the largest wooddomed structures in the world and provides indoor event space for just about any occasion and crowds from 1,000 to 23,000. It is impossible to guess what’s next to appear in the Tacoma Dome, but that’s a good thing. Case and point, there is a wedding expo this month (March 25-26), the PBR: Professional Bull Riders competition featuring the world’s top 35 bull riders in April, and a Lady Gaga concert this summer. Going to the scheduled Bruno Mars concert this July after a day on the water sounds like a pretty good combination. Plan ahead and check out ticket availability and prices at tacomadome.org.

The Arts, Bravo! Tacoma may have one of the highest concentrations of live-performance art theaters in the Pacific Northwest, especially if one looks at the blocks bordered by South 9th Street and South 11th Street, and Court Street and Commerce Street. The Rialto Theater is housed in a former art deco movie house and features musicals, operas, concerts, and other events. The Pantages Theater, originally built as a vaudeville theater in 1915, is a landmark venue for musicals, live music concerts, and comedy, and the Theatre on the Square is right down the road. All three are managed by the local Broadway Center for the Performing Arts (broadwaycenter.com). The Tacoma Youth Theatre and Tacoma Comedy Club are just a stone’s throw away to boot. Although a few blocks north, the independent Grand Cinema screens indie and foreign movies and hosts the Tacoma Film Festival. Dukesbay Productions, which features local playwrights, is nearby as well.

All the latest on Power Boating & Sail in the Northwest, featuring a guide to taking your boat through locks, a retrospective of the 2017 Seattle Boat Show, a guide to beating motion sickness, all the details of the copper paint phase-out, and much more!