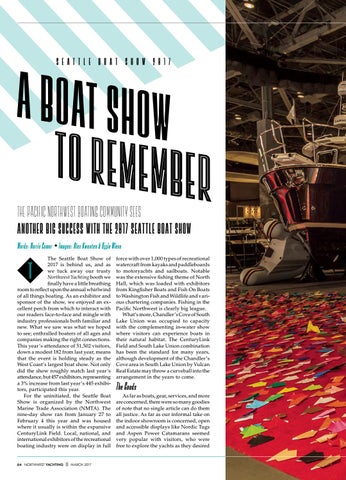 A BOAT SHOW TO REMEMBER THE PACIFIC NORTHWEST BOATING COMMUNITY SEES ANOTHER BIG SUCCESS WITH THE 2017 SEATTLE BOAT SHOW Words: Norris Comer Images: Alex Kwanten &amp; Ozzie Wiese The Seattle Boat Show of 2017 is behind us, and as we tuck away our trusty Northwest Yachting booth we finally have a little breathing room to reflect upon the annual whirlwind of all things boating. As an exhibitor and sponsor of the show, we enjoyed an excellent perch from which to interact with our readers face-to-face and mingle with industry professionals both familiar and new. What we saw was what we hoped to see; enthralled boaters of all ages and companies making the right connections. This year’s attendance of 51,502 visitors, down a modest 182 from last year, means that the event is holding steady as the West Coast’s largest boat show. Not only did the show roughly match last year’s attendance, but 457 exhibitors, representing a 3% increase from last year’s 445 exhibitors, participated this year. For the uninitiated, the Seattle Boat Show is organized by the Northwest Marine Trade Association (NMTA). The nine-day show ran from January 27 to February 4 this year and was housed where it usually is within the expansive CenturyLink Field. Local, national, and international exhibitors of the recreational boating industry were on display in full

force with over 1,000 types of recreational watercraft from kayaks and paddleboards to motoryachts and sailboats. Notable was the extensive fishing theme of North Hall, which was loaded with exhibitors from Kingfisher Boats and Fish On Boats to Washington Fish and Wildlife and various chartering companies. Fishing in the Pacific Northwest is clearly big league. What’s more, Chandler’s Cove of South Lake Union was occupied to capacity with the complementing in-water show where visitors can experience boats in their natural habitat. The CenturyLink Field and South Lake Union combination has been the standard for many years, although development of the Chandler’s Cove area in South Lake Union by Vulcan Real Estate may throw a curveball into the arrangement in the years to come.

The Goods As far as boats, gear, services, and more are concerned, there were so many goodies of note that no single article can do them all justice. As far as our informal take on the indoor showroom is concerned, open and accessible displays like Nordic Tugs and Aspen Power Catamarans seemed very popular with visitors, who were free to explore the yachts as they desired

All the latest on Power Boating & Sail in the Northwest, featuring a guide to taking your boat through locks, a retrospective of the 2017 Seattle Boat Show, a guide to beating motion sickness, all the details of the copper paint phase-out, and much more!