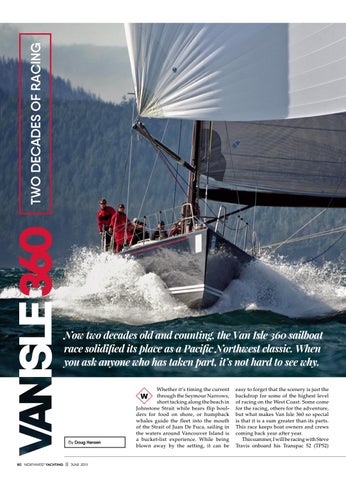 TWO DECADES OF RACING Now two decades old and counting, the Van Isle 360 sailboat race solidiﬁed its place as a Paciﬁc Northwest classic. When you ask anyone who has taken part, it’s not hard to see why.

Whether it’s timing the current W through the Seymour Narrows, short tacking along the beach in Johnstone Strait while bears flip boulders for food on shore, or humpback whales guide the fleet into the mouth of the Strait of Juan De Fuca, sailing in the waters around Vancouver Island is a bucket-list experience. While being blown away by the setting, it can be

easy to forget that the scenery is just the backdrop for some of the highest level of racing on the West Coast. Some come for the racing, others for the adventure, but what makes Van Isle 360 so special is that it is a sum greater than its parts. This race keeps boat owners and crews coming back year after year. This summer, I will be racing with Steve Travis onboard his Transpac 52 (TP52) 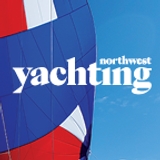