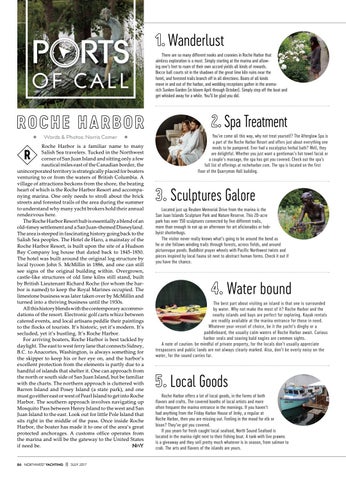 Wanderlust There are so many different nooks and crannies in Roche Harbor that aimless exploration is a must. Simply starting at the marina and allowing one’s feet to roam of their own accord yields all kinds of rewards. Bocce ball courts sit in the shadows of the great lime kiln ruins near the hotel, and forested trails branch off in all directions. Boats of all kinds move in and out of the harbor, and wedding receptions gather in the aromarich Sunken Garden (in bloom April through October). Simply step off the boat and get whisked away for a while. You’ll be glad you did.

Spa Treatment Words &amp; Photos: Norris Comer Roche Harbor is a familiar name to many Salish Sea travelers. Tucked in the Northwest corner of San Juan Island and sitting only a few nautical miles east of the Canadian border, the unincorporated territory is strategically placed for boaters venturing to or from the waters of British Columbia. A village of attractions beckons from the shore, the beating heart of which is the Roche Harbor Resort and accompanying marina. One only needs to stroll about the brick streets and forested trails of the area during the summer to understand why many yacht brokers hold their annual rendezvous here. The Roche Harbor Resort hub is essentially a blend of an old-timey settlement and a San Juan-themed Disneyland. The area is steeped in fascinating history going back to the Salish Sea peoples. The Hotel de Haro, a mainstay of the Roche Harbor Resort, is built upon the site of a Hudson Bay Company log house that dated back to 1845-1850. The hotel was built around the original log structure by local tycoon John S. McMillin in 1886, and one can still see signs of the original building within. Overgrown, castle-like structures of old lime kilns still stand, built by British Lieutenant Richard Roche (for whom the harbor is named) to keep the Royal Marines occupied. The limestone business was later taken over by McMillin and turned into a thriving business until the 1930s. All this history blends with the contemporary accommodations of the resort. Electronic golf carts whizz between catered events, and local artisans peddle their paintings to the flocks of tourists. It’s historic, yet it’s modern. It’s secluded, yet it’s bustling. It’s Roche Harbor. For arriving boaters, Roche Harbor is best tackled by daylight. The east to west ferry lane that connects Sidney, B.C. to Anacortes, Washington, is always something for the skipper to keep his or her eye on, and the harbor’s excellent protection from the elements is partly due to a handful of islands that shelter it. One can approach from the north or south side of San Juan Island, but be familiar with the charts. The northern approach is cluttered with Barren Island and Posey Island (a state park), and one must go either east or west of Pearl Island to get into Roche Harbor. The southern approach involves navigating up Mosquito Pass between Henry Island to the west and San Juan Island to the east. Look out for little Pole Island that sits right in the middle of the pass. Once inside Roche Harbor, the boater has made it to one of the area’s great protected anchorages. A customs office operates from the marina and will be the gateway to the United States if need be.

You’ve come all this way, why not treat yourself? The Afterglow Spa is a part of the Roche Harbor Resort and offers just about everything one needs to be pampered. Ever had a eucalyptus herbal bath? Well, they are delightful. Whether you just want a gentleman’s hot towel facial or a couple’s massage, the spa has got you covered. Check out the spa’s full list of offerings at rocheharbor.com. The spa is located on the first floor of the Quarryman Hall building.

Sculptures Galore Located just up Reuben Memorial Drive from the marina is the San Juan Islands Sculpture Park and Nature Reserve. This 20-acre park has over 150 sculptures connected by five different trails, more than enough to eat up an afternoon for art aficionados or hobbyist shutterbugs. The visitor never really knows what’s going to be around the bend as he or she follows winding trails through forests, across fields, and around picturesque ponds. Buddhist prayer wheels with Pacific Northwest twists and pieces inspired by local fauna sit next to abstract human forms. Check it out if you have the chance.

Water bound The best part about visiting an island is that one is surrounded by water. Why not make the most of it? Roche Harbor and the nearby islands and bays are perfect for exploring. Kayak rentals are readily available at the marina entrance for those in need. Whatever your vessel of choice, be it the yacht’s dinghy or a paddleboard, the usually calm waters of Roche Harbor await. Curious harbor seals and soaring bald eagles are common sights. A note of caution: be mindful of private property, for the locals don’t usually appreciate trespassers and public lands are not always clearly marked. Also, don’t be overly noisy on the water, for the sound carries far.

Local Goods Roche Harbor offers a lot of local goods, in the forms of both flavors and crafts. The covered booths of local artists and more often frequent the marina entrance in the mornings. If you haven’t had anything from the Friday Harbor House of Jerky, a regular at Roche Harbor, then you are missing out. Feeling in the mood for elk or bison? They’ve got you covered. If you yearn for fresh caught local seafood, North Sound Seafood is located in the marina right next to their fishing boat. A tank with live prawns is a giveaway and they sell pretty much whatever is in season, from salmon to crab. The arts and flavors of the islands are yours.

All the latest on Power Boating & Sail in the Northwest, featuring an insider's guide to the Vic-Maui Sailboat Race, a Craft Beer Cruise through Puget Sound, 50 years of Washington Sea Grant, a pro's guide celestial navigation, a chat with a Carbon Fiber specialist and much more!