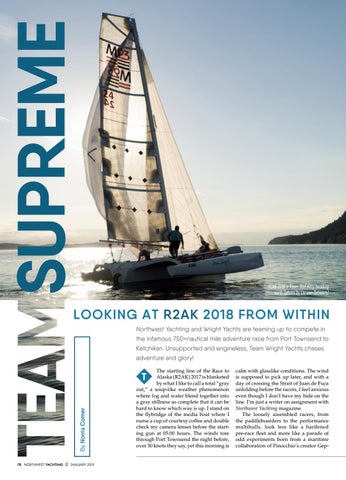 LOOKING AT R2AK 2018 FROM WITHIN Northwest Yachting and Wright Yachts are teaming up to compete in the infamous 750-nautical mile adventure race from Port Townsend to Ketchikan. Unsupported and engineless, Team Wright Yachts chases adventure and glory! The starting line of the Race to Alaska (R2AK) 2017 is blanketed by what I like to call a total “gray out,” a soup-like weather phenomenon where fog and water blend together into a gray stillness so complete that it can be hard to know which way is up. I stand on the flybridge of the media boat where I nurse a cup of courtesy coffee and double check my camera lenses before the starting gun at 05:00 hours. The winds tore through Port Townsend the night before, over 30 knots they say, yet this morning is

calm with glasslike conditions. The wind is supposed to pick up later, and with a day of crossing the Strait of Juan de Fuca unfolding before the racers, I feel anxious even though I don’t have my hide on the line. I’m just a writer on assignment with Northwest Yachting magazine. The loosely assembled racers, from the paddleboarders to the performance multihulls, look less like a hardened pre-race fleet and more like a parade of odd experiments born from a maritime collaboration of Pinocchio’s creator Gep-

The latest on power and sail boating in the Northwest, featuring our annual Washington Marina Guide, a pro's guide to the upcoming Seattle Boat Show, our R2AK participation announcement, a maritime lawyer weighs in on cannabis laws/rights, we explore La Paz, Mexico, talk marine toilets in our Ask the Experts, and more, more, more!