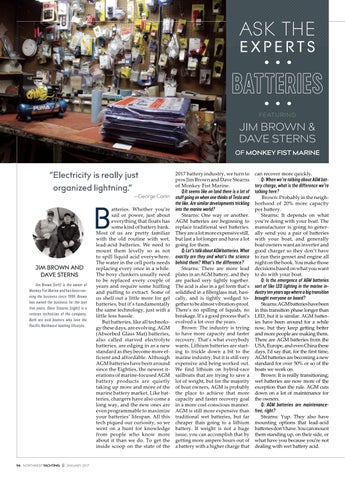 B JIM BROWN AND DAVE STERNS Jim Brown (left) is the owner of Monkey Fist Marine and has been running the business since 1999. Brown has owned the business for the last five years. Dave Stearns (right) is a veteran technician of the company. Both are avid boaters who love the Pacific Northwest boating lifestyle.

atteries. Whether you’re sail or power, just about everything that floats has some kind of battery bank. Most of us are pretty familiar with the old routine with wet, lead-acid batteries. We need to mount them levelly so as not to spill liquid acid everywhere. The water in the cell ports needs replacing every once in a while. The boxy clunkers usually need to be replaced every couple of years and require some huffing and puffing to extract. Some of us shell out a little more for gel batteries, but it’s fundamentally the same technology, just with a little less hassle. But batteries, like all technology these days, are evolving. AGM (Absorbed Glass Mat) batteries, also called starved electrolyte batteries, are edging in as a new standard as they become more efficient and affordable. Although AGM batteries have been around since the Eighties, the newest iterations of marine-focused AGM battery products are quietly taking up more and more of the marine battery market. Like batteries, chargers have also come a long way, and the new ones are even programmable to maximize your batteries’ lifespan. All this tech piqued our curiosity, so we went on a hunt for knowledge from people who know more about it than we do. To get the inside scoop on the state of the

2017 battery industry, we turn to pros Jim Brown and Dave Stearns of Monkey Fist Marine. Q:It seems like on land there is a lot of stuff going on when one thinks of Tesla and the like. Are similar developments trickling into the marine world? Stearns: One way or another. AGM batteries are beginning to replace traditional wet batteries. They are a lot more expensive still, but last a lot longer and have a lot going for them. Q: Let’s talk about AGM batteries. What exactly are they and what’s the science behind them? What’s the difference? Stearns: There are more lead plates in an AGM battery, and they are packed very tightly together. The acid is also in a gel form that’s solidiﬁed in a ﬁberglass mat, basically, and is tightly wedged together to be almost vibration-proof. There’s no spilling of liquids, no breakage. It’s a good process that’s evolved a lot over the years. Brown: The industry is trying to have more capacity and faster recovery. That’s what everybody wants. Lithium batteries are starting to trickle down a bit to the marine industry, but it is still very expensive and being worked out. We find lithium on hybrid-race sailboats that are trying to save a lot of weight, but for the majority of boat owners, AGM is probably the place to achieve that more capacity and faster recovery goal in a more cost-conscious manner. AGM is still more expensive than traditional wet batteries, but far cheaper than going to a lithium battery. If weight is not a huge issue, you can accomplish that by getting more ampere hours out of a battery with a higher charge that

can recover more quickly. Q: When we’re talking about AGM battery charge, what is the difference we’re talking here? Brown: Probably in the neighborhood of 20% more capacity per battery. Stearns: It depends on what you’re doing with your boat. The manufacturer is going to generally send you a pair of batteries with your boat, and generally boat owners want an inverter and good charger so they don’t have to run their genset and engine all night on the hook. You make those decisions based on what you want to do with your boat. Q: Is the emergence of AGM batteries sort of like LED lighting in the marine industry ten years ago where a big transition brought everyone on board? Stearns: AGM batteries have been in this transition phase longer than LED, but it is similar. AGM batteries have been around for a while now, but they keep getting better and more people are making them. There are AGM batteries from the USA, Europe, and even China these days. I’d say that, for the ﬁrst time, AGM batteries are becoming a new standard for over 50% or so of the boats we work on. Brown: It is really transitioning; wet batteries are now more of the exception than the rule. AGM cuts down on a lot of maintenance for the owners. Q: AGM batteries are maintenancefree, right? Stearns: Yup. They also have mounting options that lead-acid batteries don’t have. You can mount them standing up, on their side, or what have you because you’re not dealing with wet battery acid.

All the latest on Power Boating & Sail in the Northwest, featuring a preview of the 2017 Seattle Boat Show, our annual Washington Marina & Fuel Dock Guide, a look at the Poulsbo Winter Rendezvous, expert Battery advice, and much more!