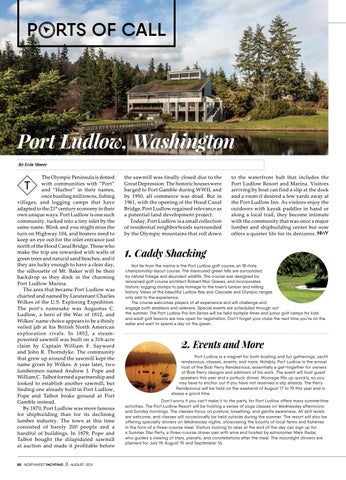 Port Ludlow, Washington By Evin Moore The Olympic Peninsula is dotted with communities with “Port” and “Harbor” in their names, once bustling mill towns, fishing villages, and logging camps that have adapted to the 21st century economy in their own unique ways. Port Ludlow is one such community, tucked into a tiny inlet by the same name. Blink and you might miss the turn on Highway 104, and boaters need to keep an eye out for the inlet entrance just north of the Hood Canal Bridge. Those who make the trip are rewarded with walls of green trees and natural sand beaches, and if they are lucky enough to have a clear day, the silhouette of Mt. Baker will be their backdrop as they dock in the charming Port Ludlow Marina. The area that became Port Ludlow was charted and named by Lieutenant Charles Wilkes of the U.S. Exploring Expedition. The port’s namesake was Augustus C. Ludlow, a hero of the War of 1812, and Wilkes’ name choice appears to be a thinly veiled jab at his British North American exploration rivals. In 1852, a steampowered sawmill was built on a 318-acre claim by Captain William F. Sayward and John R. Thorndyke. The community that grew up around the sawmill kept the name given by Wilkes. A year later, two lumbermen named Andrew J. Pope and William C. Talbot formed a partnership and looked to establish another sawmill, but finding one already built in Port Ludlow, Pope and Talbot broke ground at Port Gamble instead. By 1870, Port Ludlow was more famous for shipbuilding than for its declining lumber industry. The town at this time consisted of barely 200 people and a handful of buildings. In 1879, Pope and Talbot bought the dilapidated sawmill at auction and made it profitable before

the sawmill was finally closed due to the Great Depression. The historic houses were barged to Port Gamble during WWII, and by 1950, all commerce was dead. But in 1961, with the opening of the Hood Canal Bridge, Port Ludlow regained relevance as a potential land development project. Today, Port Ludlow is a small collection of residential neighborhoods surrounded by the Olympic mountains that roll down

to the waterfront hub that includes the Port Ludlow Resort and Marina. Visitors arriving by boat can find a slip at the dock and a room if desired a few yards away at the Port Ludlow Inn. As visitors enjoy the outdoors with kayak paddles in hand or along a local trail, they become intimate with the community that was once a major lumber and shipbuilding center but now offers a quieter life for its denizens.

1. Caddy Shacking Not far from the marina is the Port Ludlow golf course, an 18-hole championship layout course. The manicured green hills are surrounded by natural foliage and abundant wildlife. The course was designed by renowned golf course architect Robert Muir Graves, and incorporates historic logging stumps to pay homage to the town’s lumber and milling history. Views of the beautiful Ludlow Bay and Cascade and Olympic ranges only add to the experience. The course welcomes players of all experience and will challenge and engage both amateurs and veterans. Special events are scheduled through out the summer. The Port Ludlow Pro Am Series will be held multiple times and junior golf camps for kids and adult golf lessons are now open for registration. Don’t forget your clubs the next time you’re on the water and want to spend a day on the green.

2. Events and More Port Ludlow is a magnet for both boating and fun gatherings, yacht rendezvous, classes, events, and more. Notably, Port Ludlow is the annual host of the Bob Perry Rendezvous, essentially a get-together for owners of Bob Perry designs and admirers of his work. The event will host guest speakers this year and a potluck dinner. Moorage fills up quickly, so you may have to anchor out if you have not reserved a slip already. The Perry Rendezvous will be held on the weekend of August 17 to 19 this year and is always a good time. Don’t worry if you can’t make it to the party, for Port Ludlow offers many summertime activities. The Port Ludlow Resort will be hosting a series of yoga classes on Wednesday afternoons and Sunday mornings. The classes focus on posture, breathing, and gentle awareness. All skill levels are welcome, and classes will occasionally be held outside during the summer. The resort will also be offering specialty dinners on Wednesday nights, showcasing the bounty of local farms and fisheries in the form of a three-course meal. Visitors looking to relax at the end of the day can sign up for a Summer Star Party, a three-course dinner pair with wine and hosted by astronomer Mark Radar, who guides a viewing of stars, planets, and constellations after the meal. The moonlight dinners are planned for July 19, August 19, and September 16.

The latest on power and sail boating in the Northwest, featuring an in-depth look at Albacore Sportfishing; the cruise of a lifetime to the Marshall Islands; An R2AK 2018 Wrap-up, the latest Leschi & Lakewood deveopments; A trip to Port Ludlow, Washington, Topside Paint advice in our Ask the Experts, and much, much, more!