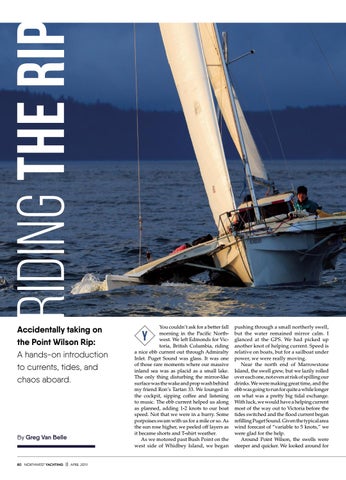 OF THE SPECIES: TUGS

Accidentally taking on the Point Wilson Rip: A hands-on introduction to currents, tides, and chaos aboard.

You couldn’t ask for a better fall morning in the Pacific Northwest. We left Edmonds for Victoria, British Columbia, riding a nice ebb current out through Admiralty Inlet. Puget Sound was glass. It was one of those rare moments where our massive inland sea was as placid as a small lake. The only thing disturbing the mirror-like surface was the wake and prop wash behind my friend Ron’s Tartan 33. We lounged in the cockpit, sipping coffee and listening to music. The ebb current helped us along as planned, adding 1-2 knots to our boat speed. Not that we were in a hurry. Some porpoises swam with us for a mile or so. As the sun rose higher, we peeled off layers as it became shorts and T-shirt weather. As we motored past Bush Point on the west side of Whidbey Island, we began

pushing through a small northerly swell, but the water remained mirror calm. I glanced at the GPS. We had picked up another knot of helping current. Speed is relative on boats, but for a sailboat under power, we were really moving. Near the north end of Marrowstone Island, the swell grew, but we lazily rolled over each one, not even at risk of spilling our drinks. We were making great time, and the ebb was going to run for quite a while longer on what was a pretty big tidal exchange. With luck, we would have a helping current most of the way out to Victoria before the tides switched and the flood current began refilling Puget Sound. Given the typical area wind forecast of “variable to 5 knots,” we were glad for the help. Around Point Wilson, the swells were steeper and quicker. We looked around for

The latest on power and sail boating in the Northwest: featuring a Scuba trip under Puget Sound; Part 2 of our B.C. Marina Guide; Tips for planning around Currents and Tides; 30 years of Inside Passage journeys; A trip to Vancouver's False Creek; Propane advice in our Ask the Experts, and much, much, more!