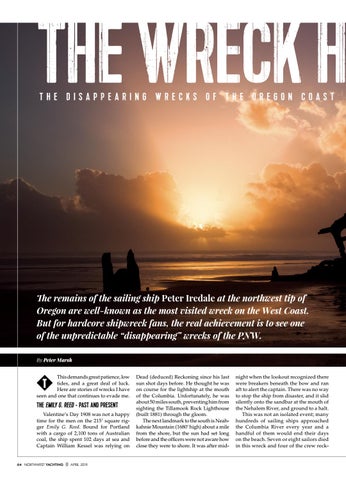 THE Wreck H The DisapPEArIng WRecks of thE Oregon COast

The remains of the sailing ship Peter Iredale at the northwest tip of Oregon are well-known as the most visited wreck on the West Coast. But for hardcore shipwreck fans, the real achievement is to see one of the unpredictable “disappearing” wrecks of the PNW. By Peter Marsh This demands great patience, low tides, and a great deal of luck. Here are stories of wrecks I have seen and one that continues to evade me.

The Emily G. ReEd - Past And PreSENt Valentine’s Day 1908 was not a happy time for the men on the 215’ square rigger Emily G. Reed. Bound for Portland with a cargo of 2,100 tons of Australian coal, the ship spent 102 days at sea and Captain William Kessel was relying on

Dead (deduced) Reckoning since his last sun shot days before. He thought he was on course for the lightship at the mouth of the Columbia. Unfortunately, he was about 50 miles south, preventing him from sighting the Tillamook Rock Lighthouse (built 1881) through the gloom. The next landmark to the south is Neahkahnie Mountain (1680’ high) about a mile from the shore, but the sun had set long before and the officers were not aware how close they were to shore. It was after mid-

night when the lookout recognized there were breakers beneath the bow and ran aft to alert the captain. There was no way to stop the ship from disaster, and it slid silently onto the sandbar at the mouth of the Nehalem River, and ground to a halt. This was not an isolated event; many hundreds of sailing ships approached the Columbia River every year and a handful of them would end their days on the beach. Seven or eight sailors died in this wreck and four of the crew reck-

The latest on power and sail boating in the Northwest, featuring a tour of historic shipwrecks on the Oregon Coast, A trip to Vietnam and hard training for the R2AK, Our 2018 Washington Marine Parks Guide, A unique look at Native American boats, A trip to Bellingham, Washington, all about pumpouts in our Ask the Experts, and much, much, more!