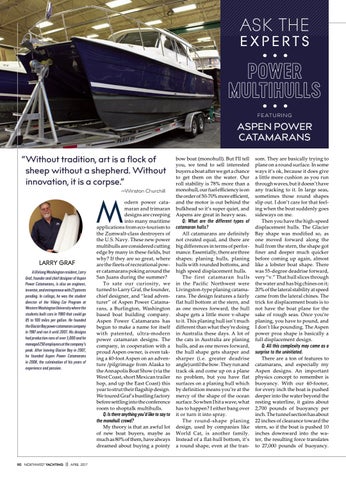 ASPEN POWER CATAMARANS “ Without tradition, art is a flock of sheep without a shepherd. Without innovation, it is a corpse.” —Winston Churchill

M LARRY GRAF A lifelong Washington resident, Larry Graf, founder and chief designer of Aspen Power Catamarans, is also an engineer, inventor, and entrepreneur with 27 patents pending. In college, he was the student director of the Viking Car Program at Western Washington University where the students built cars in 1980 that could go 85 to 100 miles per gallon. He founded the Glacier Bay power catamaran company in 1987 and ran it until 2007. His designs had production runs of over 3,000 and he managed 250 employees at the company’s peak. After leaving Glacier Bay in 2007, he founded Aspen Power Catamarans in 2008, the culmination of his years of experience and passion.

odern power catamaran and trimaran designs are creeping into many maritime applications from eco-tourism to the Zumwalt-class destroyers of the U.S. Navy. These new power multihulls are considered cutting edge by many in these fields, but why? If they are so great, where are the fleets of recreational power catamarans poking around the San Juans during the summer? To sate our curiosity, we turned to Larry Graf, the founder, chief designer, and “lead adventurer” of Aspen Power Catamarans, a Burlington, Washington based boat building company. Aspen Power Catamarans has begun to make a name for itself with patented, ultra-modern power catamaran designs. The company, in cooperation with a proud Aspen owner, is even taking a 40-foot Aspen on an adventure /pilgrimage from Alaska to the Annapolis Boat Show (via the West Coast, short Mexican trailer hop, and up the East Coast) this year to strut their flagship design. We toured Graf’s bustling factory before settling into the conference room to shoptalk multihulls. Q: Is there anything you’d like to say to the monohull crowd? My theory is that an awful lot of new boat buyers, maybe as much as 80% of them, have always dreamed about buying a pointy

bow boat (monohull). But I’ll tell you, we tend to sell interested buyers a boat after we get a chance to get them on the water. Our roll stability is 78% more than a monohull, our fuel eﬃciency is on the order of 50-70% more eﬃcient, and the motor is out behind the bulkhead so it’s super quiet, and Aspens are great in heavy seas. Q: What are the different types of catamaran hulls? All catamarans are definitely not created equal, and there are big differences in terms of performance. Essentially, there are three shapes; planing hulls, planing hulls with rounded bottoms, and high speed displacement hulls. The first catamaran hulls in the Pacific Northwest were Livingston-type planing catamarans. The design features a fairly flat hull bottom at the stern, and as one moves forward, the hull shape gets a little more v-shape to it. This planing hull isn’t much different than what they’re doing in Australia these days. A lot of the cats in Australia are planing hulls, and as one moves forward, the hull shape gets sharper and sharper (i.e. greater deadrise angle) until the bow. They run and track ok and come up on a plane no problem, but you have flat surfaces on a planing hull which by definition means you’re at the mercy of the shape of the ocean surface. So when I hit a wave, what has to happen? I either bang over it or turn it into spray. The round-shape planing design, used by companies like World Cat, is another family. Instead of a flat-hull bottom, it’s a round shape, even at the tran-

som. They are basically trying to plane on a round surface. In some ways it’s ok, because it does give a little more cushion as you run through waves, but it doesn’t have any tracking to it. In large seas, sometimes those round shapes slip out. I don’t care for that feeling when the boat suddenly goes sideways on me. Then you have the high-speed displacement hulls. The Glacier Bay shape was modified so, as one moved forward along the hull from the stern, the shape got finer and deeper much quicker before coming up again, almost like a lobster boat shape. There was 55-degree deadrise forward, very “v.” That hull slices through the water and has big chines on it; 20% of the lateral stability at speed came from the lateral chines. The trick for displacement boats is to not have the boat plane for the sake of rough seas. Once you’re planing, you have to pound, and I don’t like pounding. The Aspen power proa shape is basically a full displacement design. Q: All this complexity may come as a surprise to the uninitiated. There are a ton of features to catamarans, and especially my Aspen designs. An important physics concept to remember is buoyancy. With our 40-footer, for every inch the boat is pushed deeper into the water beyond the resting waterline, it gains about 2,700 pounds of buoyancy per inch. The tunnel section has about 22 inches of clearance toward the stern, so if the boat is pushed 10 inches downward into the water, the resulting force translates to 27,000 pounds of buoyancy.

All the latest on Power Boating & Sail in the Northwest, featuring a look at Less-traveled Island in the San Juans, our 2017 Washington Marine Parks Guide, the return of the Argo-Nauts as they round Cape Horn, all about Power Multihulls, and much more!